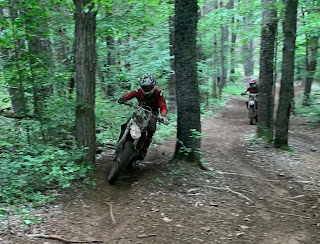 This was no easy task as "The Batman" Benjamin Bouwens aboard his Yamaha was not just going to hand it over.  The 2 would enter a fierce battle at the mid way point being chased by Dominick Morse aboard his KTM.

Let’s back up a bit shall we. The event was hosted by NYOA's Full Action Cycle on a heavily wooded track.  The open sections and carting roads were few and far between.  This was an All Woods Event.  429 AA, A, B and C Adult racers separated by 30 seconds a row quickly turned the track into a survival event.  Even though there was no rain to speak of leading up to the event, it had some serious mud holes.

Most of the racers we spoke to described the event as more of a "Tuff Mudder".  Long and deep mud holes littered with roots fore and aft.  There were numerous DNF's.  Not sure if it was the heat or the mud but many pulled out after the 2nd lap.  The event staff decided on a 5 lap race that would span 9 miles per lap.

Bouwens would get the holeshot but could not make it stick.  The Chasee became the Chaser.  Bouwens would stay with in a few bike lengths of Devlin the 1st 2 laps. On lap 3 Devlin would go down allowing Bouwens to slip by.  In the post race interview, all top 3 racers would recall how many times they went down.  On Lap 4 Devlin would regain the lead and stay within just a few bike lengths of Bouwen.  He would hold his lead to the end. 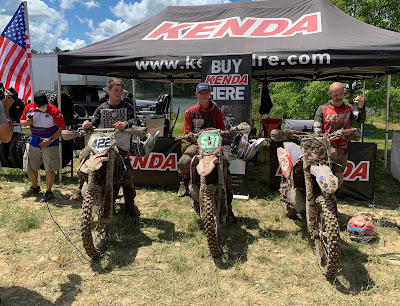 In the morning youth event saw approximately 90 Young-ins anxiously awaiting the flag drop.  For many of these kids, this was only their 2nd event of the year.   It’s safe to say the sweepers and track workers had their hands full.

The mud holes that would later claim victim to the adult racers would wreak havoc on most of the 14" front wheeled bikes.  Only the most determined would get in the required laps.  The O/A winner would actually come from the 2nd row.  On the 1st lap the battle between Suzuki's Bailey Flynn and Kawasaki mounted Brock Dennison would pull away from the rest of the pack.  Meanwhile 12-13 Supermini, Owen Barnes- Kaw, would pick his way through the 14-16 Supermini and start banging elbows with the leaders.  Barnes would eventually make the pass on both on the white flag lap and make it stick to the checkers. 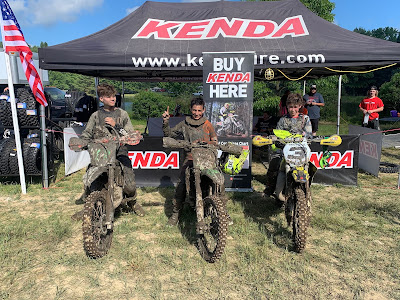 40 Pee Wee 50's along a 1.5 mile course spun their wheels quite aggressively for almost an hour in the modified youth course.  The top 5 all came from the front row Pee Wee 8's.  Owen Planty, Gunner Bouwens and Lucas Mullen, all KTM mounted were the only 3 to get in the full 7 laps separated by about a minute apart.  Great job boys and girls!