Story by Keny Held and Photos by Melissa Stanwood 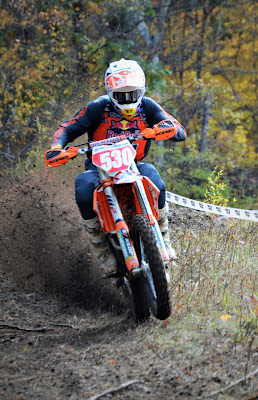 .  This being the final round for 2020, there were many class championships still not settled.  Including the #1 Grand Champion.  What made this round even more intense is that both top racers were both flying the same Beta Flag.

Last years #1 plate holder, Kyle McDonal needed to win the event and this years challenger, Thorn Devlin needed to simply finish.  I interviewed both racers prior to the race and both said they were going for the win this day and for year end.  There was no parley expressed or implied.  Friends since their 65cc battles in South Jersey, the 2 racers have a great respect and admiration for each other.  20 NETRA, JDay, P27 and AMA East AA/Pro regulars would show up at this "Months in the making" event.  This would also be Knox Trail Riders 1st AMA sanctioned HS in over 10 years.  Welcome Back!

A 7.2 mile extremely technical trail was laid out for the average 200 rider turn out however 375 would be unloading their bikes this day.  A welcomed surprise for the club.  2" of rain were delivered for dust remediation on Friday. This was great for the track but not too good for parking.  The club ordered 4 truck loads of gravel and put 3 skid steers to work insuring no rigs would stay stuck. On race day however the conditions were a "10".  So lets get to the race!

The 2020 final "10 Seconds" was announced and the flag dropped.  It was KTM's Jonathan McDougal with the hole shot.  Immediately after the 1st turn there was a step down into a session of lefts and rights old school moto track.  Following the AA/Pro lines, the rest of the A and B lines would all get off without a glitch.  Following the old school moto track, the racers were sent into some up and down 6' wide virgin trails.  The club did a phenomenal job with the arrows and ribbon.

After the 1st woods section, the racers would be put through an Enduro-X and then 4 miles of Single Track.  After 17 minutes I 4 stroke could be heard emerging from the last uphill just below the scoring area.  It was none other then New England favorite, Ben Kelley aboard his KTM.  Back about 10 seconds was PA native and AMA East regular Thorn Devlin aboard his Beta.  Less then a minute back was Beta mounted Kyle McDonal. Well they meant what they said when they were "Going for the win".  Sherco's Gavin Simon and KTM's Mike Bloom would round out the top 5.  On lap 2 there were not many changes.  Kelley was cutting faster lap times while Devlin and McDonal would keep up the pressure.  Lap 3, 4 and 5 would deliver the same with the exception of Kelley putting more and more real estate between 2nd and 3rd.  On lap 6, Devlin would hit a tree and re-injure his shoulder and collarbone from a previous race which would not allow him to hold on any further.  He was forced to retire early but not before securing enough laps to hold onto the championship.  Also falling victim to lap 6 was McDonal who would suffer a mechanical.  His hopes for a 3 year sweep would come to an end.  Meanwhile the hole shot kid, McDougal would start to make a final lap push securing a spot in 2nd.  The surprise of the day to everyone was the low profile, no fanfare, multi time Enduro champion Mike Lafferty aboard his KTM who was launched from the A Open line.

Unless you were glued to the scoring monitor you did not even know he was there. Lafferty would settle into 3rd position on the white flag lap.  In the end it was Kelley, McDougal and Lafferty. 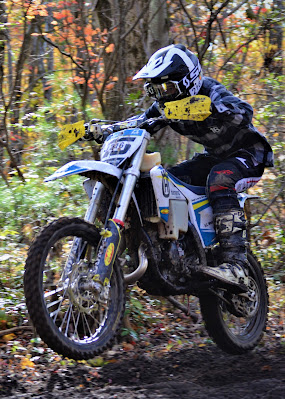 In the Morning C event Schoolboy 2 racer Andrew Veit aboard his KTM would take the early lead in his class and hold off all challengers from the 7 rows behind for the Overall.  2nd place would not be settled that easily.  Schoolboy 1 racer Patrick Callahan aboard his KTM would start an adjust time battle between Schoolboy 2 Olin Daniels.  This would not be settled til the final lap giving the 2nd step to Daniels.

In the Youth Main, South Jersey's and AMA East regular Robert "ACME Rocket" Weiss would take the early lead from the 12-13 Super mini (2nd row) aboard his Weiss prepped HUS.  He would hold this lead for the entire 1.5 hour race.  This would also secure his 12-13 AMA East #1 plate.  2nd place was also AMA East regular Harvey "Raging" Bull from the 14-16 Super Mini Class.  The surprise third position would come from New Englander Jiggs Fustini also aboard a KTM but Fustini would launch from the 4th 9-11 85cc row.  Kudos to that fine young lad as there was no shortage of talent in the 3 rows ahead of him.

In the Pee Wees the pace was set early on by Overall finisher Jack Ford - KTM with his KTM Co Horts AJ Verdile in 2nd and 3rd place Nick Ignachuck.  Notable mention goes to 4-8 50cc girl Sadie Weiss for her win and 2020 Championship in her 1st year racing.

Round 8 of the Mid-Atlantic XC Series - Potomac Vintage Riders 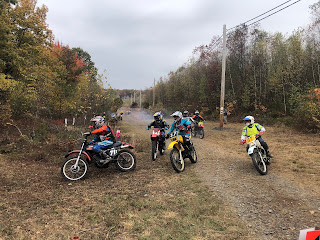 Round 8 of the Mid-Atlantic XC Series was held on October 11 on private property near Frackville Pennsylvania. The  area is still active in the coal mining industry but this day it was going to be used for some 2-wheeled vintage XC fun!

South Penn Enduro Riders (SPER) had the honors of hosting the event and laying out the 4.5 mile course which consisted of  fresh cut loamy single track woods, very little elevation change and short bursts on the powerline and back into the woods with just a “few rocks.” When you are from Pennsylvania a “few rocks“ means about 1000!

The “stick farm“ (aka New Jersey) consisting of saplings was the tightest section of the course. The sandy/pebble type dirt in this section added to the variety.

It was a great fall weekend with the leaves changing colors and the temperatures in the 60s made for great racing conditions. Although there hasn’t been very much rain in this area lately the dust was at a minimum.

With the season winding down and championship points standings coming to a close, this event could be the deciding factor for a few classes and for the overall for the year in both the vintage and post vintage categories. 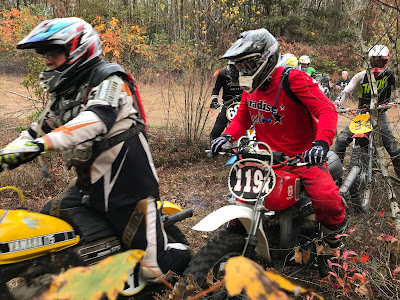 Now for some race action…

For the start of both the vintage and the post vintage races, each row would be a dead engine start every 30 seconds with the usual “tennnnn seconds” til launch time announcement by the starter. About 45 riders lined up in their respective classes for the 10:30am start of the vintage race.

The start of row one saw Christian Brumbaugh (74X) with the holeshot. Main rival  Brian Grove 119 X got jammed up a little bit in the first turn but soon caught up to Brumbaugh and gave the spectators a fabulous show of good clean racing throughout the 4 lap race.

For three laps the two riders were within one second of each other until lap 4 when Brumbaugh increased the gap. It was great to see Joe Zito back in action aboard a Yamaha after several years on an old Triumph to round out the top three overall.

While most of the top 10 riders were from the expert classes, a shout out goes to sixth place overall Blade Schmidt 199 from the vintage open intermediate class and Top 10 overall goes to Yamaha mounted rider 700 Brett Reichart.

Can’t forget about the women’s classes… Intermediate riders Kelly Pierce 402 Emily Reichart 733 Jenn Smith 3R finished in that order for the intermediate class and Laci Horvath 996 from the expert women’s class had an unfortunate chain issue with her Husky resulting in a DNF. Hopefully she was having fun up to that point.

Those two put on an amazing show of good clean racing and great battles throughout the season. Congratulations to you both! 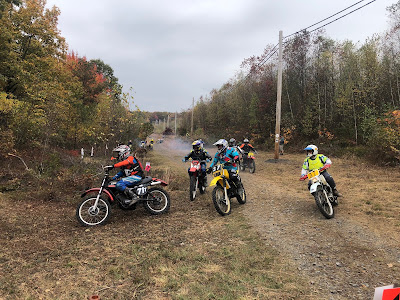 Now after all that excitement it’s time for some PV race action.

Multi-time ISDE Gold medalist Fred Hoess heard there was going to be an awesome vintage race in Pennsylvania that he may be interested in. (yeah I told him)

He wasn’t sure if he would be able to arrange his work schedule in Colorado but it worked out and he showed up and entered in the event.

About 78 riders lined up for the 1:30pm start of the PV race and after the 10 second  warning the green flag  waved for the start of the first row.

Fred Hoess took the holeshot into the tight right hand first turn and into the woods. 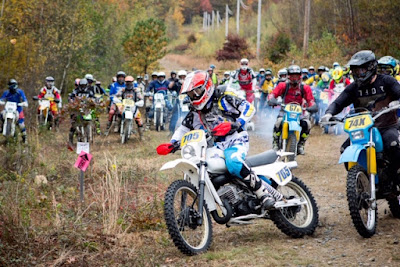 Following close behind was 119X Brian Grove and 74X Christian Brumbaugh who once again battled for year end overall championship. This time in the PV division. 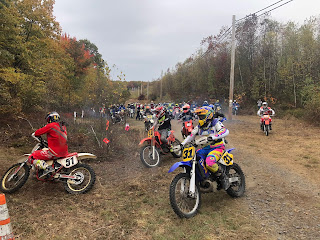 Next to launch off the line was the 50+ and 60+ Experts.Wow! What a crowded first turn that ended up being.

The three “Sea of Blue” Yamahas of Mid-Atlantic XC organizer 11C Dave Kutskel, 945 Craig Shenigo and 104 (me) Steve Bowman led the pack thru the first turn. This was a great race between us three with Shenigo taking the 50+ Expert win and Kutskel and myself just seconds behind.

So well into the first lap “Fast Fred” was on cruise control leading the overall and enjoying the nice flow of the course. He should have felt right at home in the “New Jersey” section of tight trees and single track and after five laps of a super fun course and excellent racing, Fred Hoess takes the overall win. 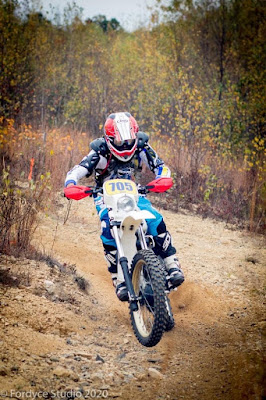 Fourth overall was Wyatt Stoup and fifth overall went to Christian Brumbaugh followed by Brian Grove in sixth overall. These two battled back-and-forth throughout the day. Seventh goes to SPER member Mark Hummel who was a huge help in helping to design and set up the course with Ethan Waddell, Brett Reichart and Craig Shenigo rounding out the top ten.

The real down to the wire battle  was between Christian Brumbaugh and Brian Grove for the PV overall championship for 2020. Brumbaugh came out on top and those men deserve a huge round of applause for their accomplishments.

SPER would like to thank all of it’s volunteers that helped make this event a success: 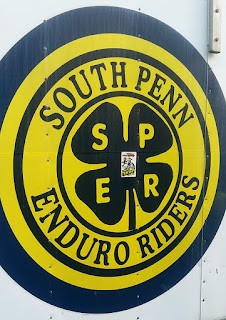 Also thanks to WRMC’s Rick Albert for helping clear trail.

Potomac Vintage Riders and volunteers from the Mid-Atlantic XC group that take care of sign up, scoring and awards. 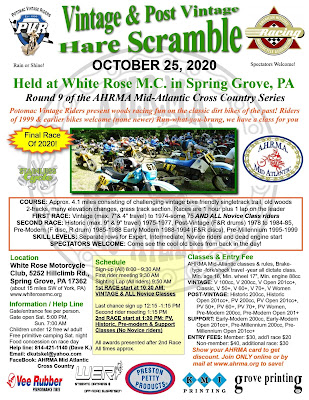 Final round for 2020 - get the details by clicking the flyer above.