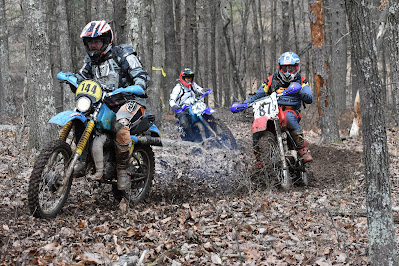 Harold Silbaugh leads Jim Laird and Doug Kurz
For the past two seasons, the opening round of AHRMA’s Mid-Atlantic Cross-Country season took place at the familiar Rocket Raceway location outside of rural Three Springs, PA. However, just prior to the kickoff of the 2020 season, the adjacent motocross property had been sold to another operating group, which forced the vintage crew to a less accommodating, but still workable, alternative parking area.

As the surrounding woodland that housed the majority of the established trails remained in property owner Mark Carlson’s name, the AHRMA bunch continued the legacy of using the Rocket Raceway name while the motocross area took on an alphanumeric moniker.

Fast forward to the present, and we find that the MX track has once again changed hands and reverted to calling itself Rocket Raceway, which just “sounds right”. The new ownership was gracious enough to cooperate with Mark and series’ coordinator Dave Kutskel for the race weekend and allow a record number of competitors to return to the spacious, flat, parking area from years past as well as use some of the trails that lie on the MX property that were off limits the past couple seasons. Many thanks to the owners of Rocket Raceway for the accommodations! 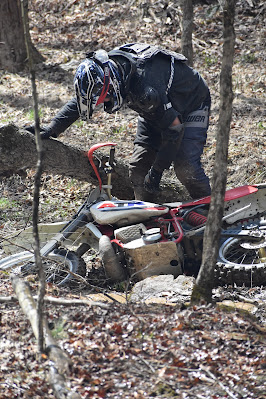 "Not in front of the photographer Johnny B!"

The Mid-Atlantic group has been using this facility for many years and curated a fine batch of possible course layouts. The 2022 course was typical Rocket, with a tremendous variety of terrain and elevation, plenty of entertaining single track, roots, and rocks, and enough open or two-track mileage to sneak past the bike in front of you. With the series’ trail boss extraordinaire Mike Zdybak on the shelf learning to harness the powers of his new bionic shoulder, Brock Kutskel stepped in to handle a lot of the burden of clearing the winter’s leftover downed trees and ensure a clear path.

A good amount of consideration was given to avoiding areas that tend to become bottlenecks due to water and mud, which is important considering the recent history here. You see, while springtime weather in general is a gamble, if you had to spin a roulette wheel of “wet” or “dry”, I’d bet it all on “wet” when it comes to spring at Rocket. Of course, this year held true to fashion with a week full of rain leading up to the first green flag of the year. But the careful layout selections paid off, and with just enough clear skies in the hours preceding, the course was far better than expected. Certainly, there were spots where water had to be crossed and the inevitable mud and ruts formed. In general, traffic was able to move through without too much drama. Awesome, competitive racing ensued…despite the frigid temperatures and occasional snow squall (told you the weather is a gamble!). 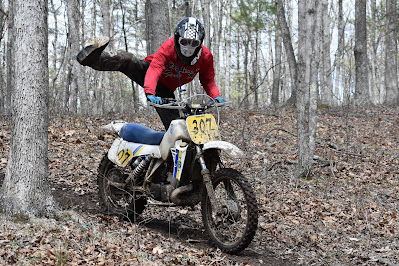 The future of the sport of vintage off-road racing was on display in the morning’s race. Not long ago the duo of Logan Holley and Brock Kutskel would have been making tracks in the youth racing scene held in conjunction with the Mid-Atlantic’s efforts, but the two have now begun to make some noise on the big stage. Logan set the pace early and didn’t look back as he pulled away for the overall and AA class win.

Brock made a last lap pass on Brett Reichart to take the runner-up position and the class win in the Vintage 200 Expert ranks. Darrell Wassil followed Brock in third overall while Brett held on for fourth. Jacob Williams took the second spot in the Vintage 200 Expert class behind Kutskel and was also solidly in the top-ten overall. Daniel Zell held the early lead on his Suzuki in Vintage 200 Intermediate action but was unable to hold off the charging BS Holley who took over the top spot on lap two and eventually take the checkers with Zell behind.

Kyle Warner returned to his winning ways in the Vintage 100 Expert class on his screaming Yamaha while his brother Larry took a hard run at the top spot in Vintage 50+ Expert. Larry’s Yamaha fell a minute short of catching winner Joe Cole’s Husqvarna. Greg Barratt rounded out the podium on his Maico. Jim Laird was number one in Vintage 50+ Intermediate on his newly acquired MX250 with Tim Spigelmyer hounding him all race. Tim fell just twelve seconds short of the top spot as he and Ed Weger went 2-3 respectively. 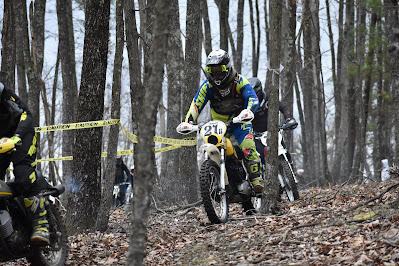 Darrell Wassil had a great showing at Rocket.

Fresh of the win in the first race, Logan Holley was about to get a lesson in speed from arguably the fastest guy in the series. John Ashcraft took charge of race two and pulled a five-minute lead on fellow fast guy Mike Blackwell for the top two spots overall. Logan hung tight to Mike for third with their pair of ITs only seconds apart. Craig Shenigo took charge of a competitive Post Vintage 50+ Expert pack with a win over Jon Brant. Joe Cole filled out the top three on the only non-Yamaha IT in the class. Darrell Wassil and Geoff Kemp went 2-3 in Post Vintage 200 Expert behind Holley while another youngster with emerging speed took the Post Vintage 200 Intermediate win when Joey Spayd II made a late race pass for the lead on his XR200R in a tight ten-rider class. John Brunnett had no intentions of turning over the Post Vintage +60 Expert class win with a wire-to-wire performance on his SWM. Jack Petrilla and John Zellam diced for the runner-up spot all race with Jack topping John at the finish. Eleven riders took the green flag in Post Vintage +60 Intermediate action with Yamaha pilot Doug Kurz besting the Can-Am duo of Tommy Tippett and 2021 class champion Glenn Hershey. Robert Radcliffe took home the top trophy in the Novice +60 class. 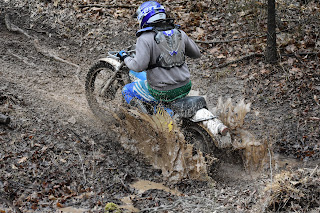 Round #1 is always a little on the wet side.

After being introduced in 2021, the third race on the schedule has continued to grow. The series has made an additional investment in 2022 by adding several age classes to the event to increase participation. With 43 bikes on the line for race three, the efforts have proven to be worth it! Brett Reichart flirted with the lead on lap one, but John Ashcraft was merely one second behind at the first pass through scoring. John made the pass soon thereafter and took the win while Ethan Waddell hustled his YZ250 to keep him in sight for the second spot in the overall results and AA class.

Brett and his KX250 held on for a hard-fought top-ten finish in the overall ranks. Sean McKinney survived a last race push by Grant Reichart in the Pre-Modern Open Expert class, but Sean was able to clear Grant’s KDX by less than ten seconds at the checkers for the win. Kelly Ashcraft took the Pre-2K Women’s Expert class in her debut in the third race on a KTM.  Twelve riders entered the various age class in the disc brake race with Craig Lowery setting the pace with a 50+ Intermediate win and top-15 overall. Other winners in the age classes include Dave Kutskel over Steve Sachetti (+50 Expert), Brad Waddell over Jack Petrilla (+60 Expert), and Tommy Tippett on an ATK over Doug Kurz (+60 Intermediate). Interestingly, Kurz competed on what appeared to be a hybrid steel tank Yamaha TT with custom modern suspension. 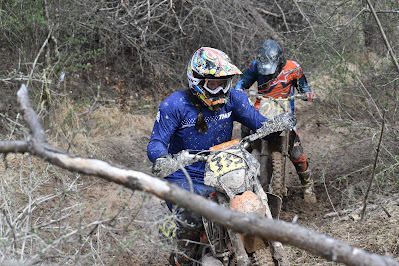 Rocket Raceway never disappoints in delivering a great experience to kickoff a fresh season of fun in the Mid-Atlantic. There’s lots more fun to come in the 2022 season with several full weekend events, an entirely new venue in late summer, and a revamped Mid-Atlantic motocross series that will be a companion to the cross-country schedule for most of its dates presenting even more opportunity to race vintage motorcycles and hang around some truly great people.

Thank you to Rocket Raceway, Mark Carlson, and the AHRMA Mid-Atlantic volunteers under the tutelage of Mr. Kutskel for making this possible. Please continue to support the sponsors that make the effort to ensure the success of this great series: Potomac Vintage Riders, Preston Petty Products, Stainless Cycle, Grove Printing, KMI Printing, Horizon Homes, and Works Enduro Riders.

The 2022 schedule and complete results from this event can be found at https://www.ahrma.org/ahrma-mid-atlantic-region. Follow the series’ Facebook page @ AHRMA Mid Atlantic Cross Country for updates and news throughout the year. 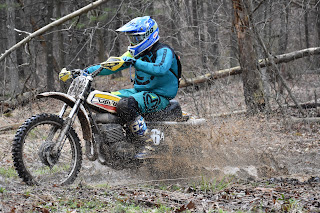 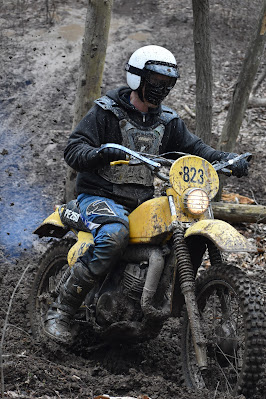 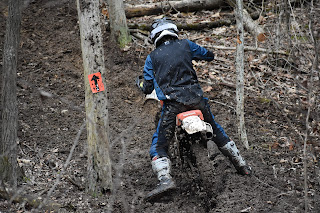 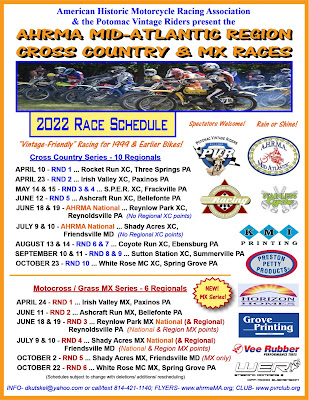