Hey all - another great weekend is in the books with our friends from the
Mid Atlantic Motocross Association.
Budds Creek had a full house with Pro Am racing, a dash for cash, great eats,
a celebration of life and a marriage proposal.

Check out our weekend video race recap here then watch for the full story in the upcoming
Brapp Magazine.

Hey all and welcome to our weekend race report from Doublin Gap Motocross Park.
The riders came out and the crew had the track in awesome condition for this annual event.

Check out our video recap at the link below and also enjoy a few images from the weekend..
Then hit the links below to check out all images and results from the event. 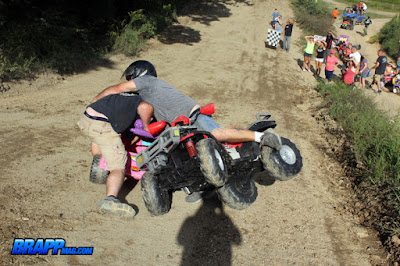 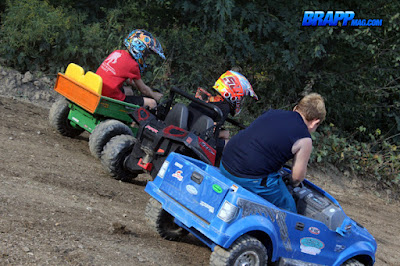 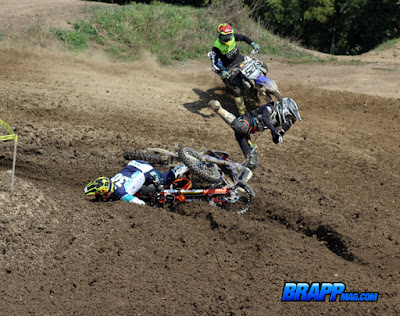 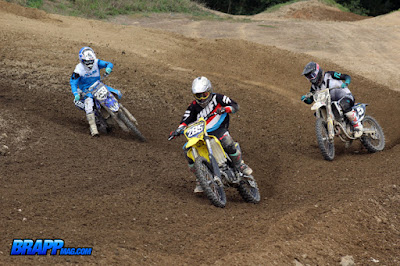 They were 3 and 4 wide all weekend 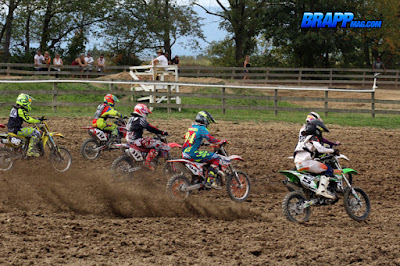 The mini racing was red hot 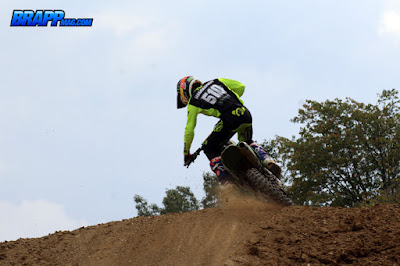 Seth Hammaker was in the house

Watch for full coverage in the next issue of  Brapp Magazine 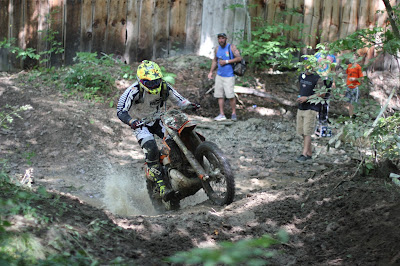 21 AA riders lined up for what was to be an epic battle between local, regional and national caliber racers.   Most notable in attendance was last weekends AMA East Winner Johnny "The Rippah" Girroir.  Girroir,  a front runner with NETRA and JDay would try his luck against the talents of Craig Delong, Wild Wally Palmer and Matt Keefer.  On to the track!  8 miles of rolling hills, grass fields and the traditional roots, rocks, mud and ruts.  Plenty of spectating areas would keep the crowds on their feet.  Also thrown in for good luck was an Enduro X section. When the flag dropped it was local racer Andrew Gross with the hole shot with Matt Keefer and Matt Quick right behind him.  After the 2nd turn it became a 3 way drag race.  Unfortunately the course ducked out of sight down an off camber so we could not see the end result.

After the 1st lap it was none other then Girroir with GNCC racer Delong and ECEA racer Lafferty in hot pursuit.  Slightly back in 4th was AMA East Points Leader Palmer.  Palmer with a not so great start later told me he had a heck of a time getting through the pack.  For 2 laps it stayed this way til Girroir decided to do an early pit stop.  This would allow Delong to pass.  Girroir and Delong would continue swapping positions in the woods.  Both admitted that you had to pick the right lines through the mud holes which were becoming deeper and tackier. At no time were the 2 top front runners more then a few seconds apart.  Lafferty dropped off the pace slightly but still had them in his sights.  On the 5th lap spotters were confirming a neck and neck battle 3/4's of the way so none of the top 3 put it on cruise control.  Girroir could be seen blasting his way through the last tight woods section with Delong right on him but just could not make the pass.

This is Girroirs 2nd 1st place finish in as many races in the AMA East HS Series.  Congrats to the Rippah!.  Delong would take 2nd and Lafferty would finish less then a minute back.  Points leader Wally Palmer would turn the corner with his happy to be here smile.  Last years #1 Kyle McDonal was racing today but with a busted up foot.  He is still in it but this weeks 10th place finish will set him back.  Notable finish was local Youth Racer Ben Wright with an 11th O/A from the B 200 line.  Carry on there laddie! 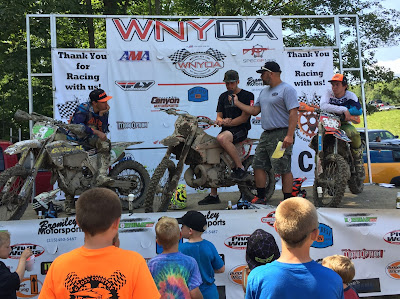 In the C event it was that KTM Beast Michael Beeler Jr from the Schoolboy class with a 7 minute lead over 2nd place Ron Hall Jr and 3rd place Logan Morley both from the C 250 class.

The youth events all to take place on Saturday.  1st up were the pee wee 50's.  An epic battle ensued for 1st place between visiting AMA East HS racers Ryder Sigety and Carter "Pretzel" Przemelewski. back in 3rd position was local racer Joshua Knapp.  Pretzel was leading most of the event until the white flag lap when a youth spectator, who was too close to the race action, jumped into the path of Pretzel and an impact occurred.  Both racer and spectator got up and Pretzel retained the lead for the moment. Sigety fighting lapped traffic thru the scoring area would eventually take over the lead and it would remain this way to the checkers.  Pretzel would settle for 2nd and Knapp 3rd.  This put Sigety into a comfortable points lead. 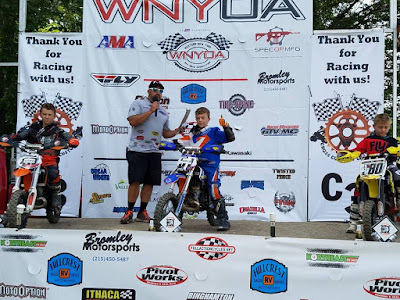 Jrs 65cc Event was up next with 26 Hot Rods on the line.  This would be WNYOA's 1st AMA East with the 65's running separate from the 85's.  This was met with great praise from the parents and racers alike.  The course was a little more 14 inch - front wheel friendly and more importantly, everyone was able to finish.  After the 1st lap the battle for the O/A was between local favorite Paul Best Jr and visiting racer Ray Grenewicz with visiting racer Vince "Spicey Meatball" Caramanna in 3rd all from the 10-11 65cc.  Of all the youth racing this day, the 65's would demonstrate the most intense battles.  Close behind the top 3 was 7-9 racer Landon Hamilton in 4th O/A.  About mid way through the race, last years #1 65 plate holder Ryan Gribbin would begin to fight his way through the pack.  A bad start combined with a 1st lap get off caused Gribbin a lot of extra effort.  Grenewicz would take the lead on lap 3 and begin to pull away from Best.  On the last lap Best would regain the lead from Grenewicz who became tangled with a lapper and could not separate the bikes.  Best would hold the lead and the checkered flag.  Gribbin snuck up on Caramanna for 3rd O/A.

In the Youth Main the battle would be between "Mad" Max Fernandez and "KTM Beast" Mike Beeler Jr.  Although they are not in the same class, this is purely for bragging rights and who gets the girls.

Local favorite Jared Detrick would be there to keep them honest.  After the 1st lap it was
Fernandez passing through the scoring booth with his bike engulfed in smoke.  He immediately pitted and was out for the day with a blown oil seal.  Beeler from the 12-13 SM line would cross next and 14-16 SM racer Billy Holmes would soon follow.  By the 3rd lap Detrick 14-16 SM had passed Holmes taking 2nd O/A.  Homes would settle for 3rd.  this would stay for the rest of the race.  Chalk another one up for "The Beast From the East" Beeler.

See more great race coverage and so much more by: Clicking Here
at September 05, 2017 No comments: