Sumter SC:  SERMA - SETRA did a phenomenal job putting together Round 1 of the AMA East Hare Scrambles Championship Series.  325 Racers ascended on the small town of Wedgfield, SC just outside of Sumter.

The weather couldn't be better.  Rain a few days before combined with a steady crosswind that kept down the dust.  From the visitors up North, the 55 degree temperatures were a welcome treat. For the local racers, it was a bit on the chilly side.  The first heat of the day was for the Pee Wee 50's. Mason Tsakanikas pulled the hole shot.   Carter Przemelewski and Ryder Sigety were busy banging bars and took themselves out in the 1st turn allowing Mason to pull away and lead first 2 laps of the 1.5 mile course. It took Carter and Ryder 3 laps but they eventually caught Mason.  On laps 5 and 6, Carter and Ryder would battle to the end but after 45 minutes it was Carter with the victory. 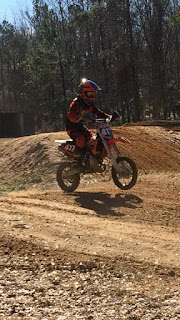 Next up were the Youth Racers.  Their event would take them across 4.5 miles of tight trails, hill climbs and sand whoops.  After lap one it was "The Beast From the East" Mike Beeler Jr.  He was leading his class and the O/A event from the 12-13 SM line.  Not too far behind was 14-15 SM Michael Overstreet.  The 2 would battle for the 1st 2 laps but Overstreet could not keep up with last years #1 Plate Holder Beeler. Sneaking up on them was 7-11 85cc Racer Grant Davis.  Davis only 11 yrs old started on the 4th row and was quickly picking his way through the 1st 3 rows.  He would eventually finish 1st in class and 4th O/A.  This is the kid to watch!  At the end of 1.5 hours it was Beeler with the Win, Overstreet in 2nd and Female Racer Brianna May riding the 14-15 SM in 3rd.

Next up was the main event.  Due to the Shortness of Daylight hours, the club decided to run A, B and C together.  It would be a 2 hour main event.  Approximately 280 Riders were on the lines with, GET THIS, 37 AA Racers.  Can you say Bike Testing.  All the AA riders were out there dialing their new 2017 sleds.  Unbeknownst to many spectators, SERMA uses a real cannon to start the event.   There is no 10 second warning.  It was just BOOM and off they went.  The course was 9 miles of the SC Sand with several elevation changes and you guessed it whoops.

After the 1st lap it was PA's Tegan Temple in the lead.  Right behind him was Sturt Baylor, Andrew Delong and Russell Bobbit.  The lead would change on Lap 2 with Baylor in the lead with Delong right on his fender and Bobbit just a few seconds back.  It was hard to keep track of the leaders as there was very little warning when they came out of the woods.  They would appear for a few seconds and then bam back in the woods. 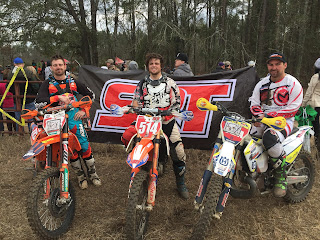 Kyle McDonal, AMA East's 2016 #1 Plate holder was just outside the top 5.  He would eventually finish 6th. As Delong and Baylor would come through scoring they would often stop and taunt each other.  It was actually quite amusing and kept the crowd entertained.  On the final lap Baylor came through once again in the lead with Delong directly behind them, where at Baylor suggested to Delong, "Hey lets put the Hammer down on this lap".  Delong trying to stay focused just couldn't and started laughing.  These two have been racing against each other for almost a decade and the crowd loved seeing the dialogue.  Unfortunately for Delong, his barkbuster let go on the final lap and hampered his grip allowing Bobbitt to take over 2nd.  It was a great race and the AMA East welcomes SETRA to the series in 2017.