Summer break is over! While this statement may bring a tear to the eye of students heading back to school, those wrapped up in the 2021 AHRMA Mid-Atlantic Cross-Country season have a totally different reaction. 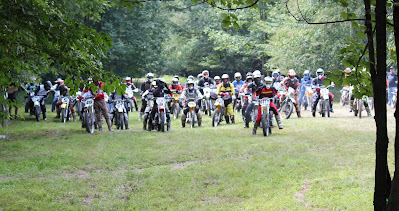 The downtime is obviously a good time to catch up on overdue maintenance or needed repairs, but after a full six-week break from action, the racers are anxious to hear “Ten seconds!” and twist a throttle again. Knowing that the second half kick-off event is the always anticipated Coyote Run, with its two-day format, chef Holley’s pig roast, camaraderie and fellowship, and famous Powder Puff event only adds to the excitement for summer break to end.

Welcoming a group this large to your home is never an easy task, but as usual, regional director Dave Kutskel and his family, wife Darlene and children Emily and Brock, always make it look easy. Their hard work and graciousness, along with the persistence and valued effort of the core group of volunteers, ensure the event easily lived up to expectations. 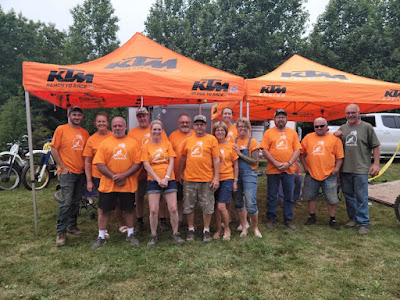 Thanks to all that make it happen - it takes an army of volunteers.

The Kutskel’s property, along with wonderful cooperation from neighboring properties, is flush with fantastic trails from past Coyote Run events as well as general play riding and practice. To supplement the existing trail system and ensure the participants get the absolute best experience, Mike Zdybak spends considerable time clearing debris and cutting fresh trail to formulate a wholly unique course for each day of the event. This year racers were treated to a Saturday course that was relatively open and flowed well through a plethora of established two-track, switch-backing through a combination of trees and underbrush, with some well-paced single-track thrown in. There was just enough elevation changes and moisture in the ground to create a few tricky spots as well.

Sunday’s course took a different approach using far more single-track including some quite tight areas along the creek bank that was run in reverse from last year. Sunday also included the spectator favorites of the shale pile hill-climb, which was descended this year as a twist, and the “pit” just off the dirt road toward the starting area, which was also run in a different direction compared to year’s past. Both day’s courses were similar in length with Sunday’s lap times just a touch longer due to the tighter terrain. While certain folks may have preference for one or the other, in general, both courses were well regarded based on the bench racing that followed, with only a sour word or two for the dust which again plagued the event although not even close to the 1930’s- dust bowl proportions from 2020. 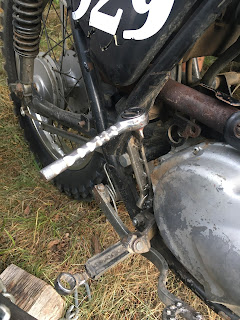 There's just something special about a Vintage bike...

Considering his obvious familiarity with the place, it is no surprise to see host Dave Kutskel near the top of the leaderboard. He was able to capture the top-overall spot on Saturday after early leader Brian Grove’s dominance was derailed when he exited on the last lap. Christian Brumbaugh (Yamaha DT250) continued his remarkable, and inspirational, recovery from a near debilitating injury with second overall and first in the Vintage Open Expert class. Runner up to Brumbaugh was Ethan Walker making a long-anticipated return to action following the birth of he and Lorena’s second child, congratulations! Third and fourth overall in Saturday’s race were captured by strong intermediate performances by Josh Horvath and Brock Kutskel who also took the top two spots in Vintage 200 Intermediate. 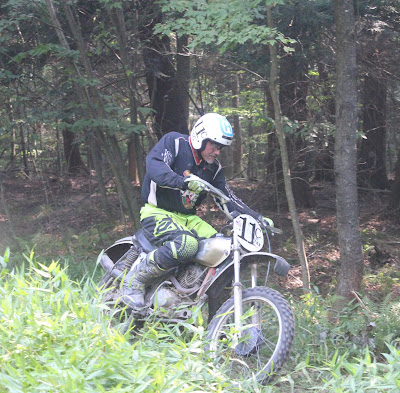 Lynn Parkins and Glenn Hershey dueled for the Vintage 60+ Intermediate win throughout as Glenn took an early lead only to fall behind Lynn on lap two. Glenn held on tight and pushed Parkins to the end, but was unable to get by, handing Lynn the win. Glenn’s Can-Am was followed by Dave McIntyre and his Honda in third. Brandon Rowe continued his strong season with a pair of Vintage Open Novice wins on the weekend with TJ Dixon claiming the runner-up spot both days. 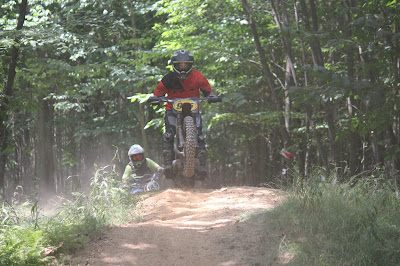 Dave Light takes his MX360 to a pair of wins on the weekend.

Brian Grove struck back on Sunday as he took the overall win on his Husqvarna with fellow AA class rider Josh Zerance (Can-Am) just behind. Kutskel led early but fell to third just ahead of another AA rider, Wyatt Stoup. Dave Light followed up Saturday’s victory in the Vintage Open Intermediate with a win yet again on his MX360. Mike Bretz would take runner-up on a Can-Am, replacing Saturday’s second place rider Aaron Walker. Tim Spigelmyer made a strong impression in his series debut Sunday by taking an early lead in the tough Vintage 200 Intermediate class, but ultimately settled for second after being forced to retire on lap three. Following a last lap pass by Kevin Marshall to take Saturday’s win, Ed Klinger’s runner-up to Kevin on Sunday may have been more impressive. Ed clipped a hidden rock on his Husqvarna on lap one, and despite being spit off the machine, the crash looked innocent enough. While he remounted and continued his pursuit of Marshall, a post-race assessment of his well-being uncovered a sizable laceration from the earlier crash which sent Ed to the ER for some repair work. Reports indicate a full recovery.

Apart from Logan Holley’s lap one lead, the rest of the post vintage weekend was all Husqvarna and Brian Grove. After Brian passed Holley on lap two Saturday, he would go on to lead every lap thereafter in taking the overall and AA class wins both days. Logan managed to hang on for second place on his Husqvarna with Craig Shenigo taking third on his Yamaha IT. 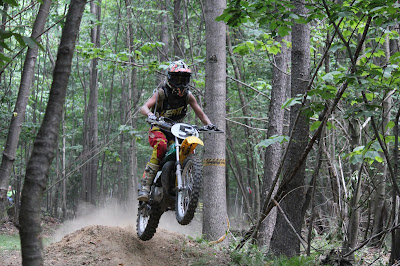 Sylas settled for second and his Dad, Sam Merrell, upheld the honor of the “older’ folks by following Geoff Kemp across the line for fourth with all except Kutskel on IT175s. The elder Merrell would best his progeny on Sunday with a strong runner-up to Brock. As typical, there was plenty of competition in the Post Vintage Women’s classes with five ladies taking to the course each day. Husqvarna/XR hybrid-mounted Laci Horvath knocked down the wins in the Expert class, Kelly Pearce was closely followed by Emily Reichart in the Intermediate field, and Claudia McDowell held off Pam Leibgold and her IT175 in the Novice class. In a duel of 80’s Yamahas, Eric Weiland was able to better his Saturday second place finish with a Post Vintage 50+ Expert win over Steve Bowman on Sunday. Robert Radcliffe and Rick Klingensmith diced for the Post Vintage 60+ Intermediate win all weekend with Rick coming out on top both days. James Nice also joined the fray on Saturday with a third in class. 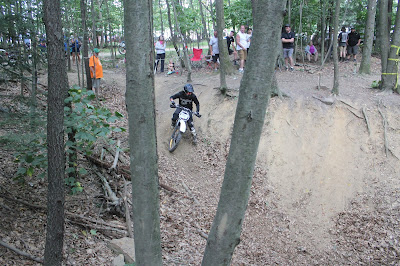 AA class riders Kurtis Palmer, Mike Blackwell, and Brian Grove, in that order, made a clean sweep of the overall podium on Saturday. With Kurtis absent for Sunday’s race, Mike took advantage and claimed the top spot followed by fellow AA competitor Wyatt Stoup. Cameron Pennington and Steve Bowman derailed the AA freight train on Sunday with their pair of Early Modern Open Expert Honda CRs as they managed one-two in the class and three-four overall.

With his characteristic XR250 out of action for the weekend, Josh Folmar scoffed at his father’s “if you can start it you can ride it” challenge by not only starting dad Keith’s beastly XR600, but piloting it to the Pre-Modern Open Intermediate class win on Saturday after chasing down Grant Reichart’s CR250 on lap three. Brian Holley rode his Husqvarna to third place. Grant again took an early lead Sunday, but this time he refused to cede to the challenge by Yamaha TT- mounted Jim Laird. Grant would lead every lap to take the win with Jim behind in second and Keith Folmar in third. Scott Day took the Early Modern 200 Intermediate win on Saturday while Tim Spigelmyer took that honor on Sunday. Greg Kemp was runner-up to each on his KDX200 and his son Greg Kemp Jr, also riding a KDX, was the winner in Sunday’s Early Modern 200 Expert contest. 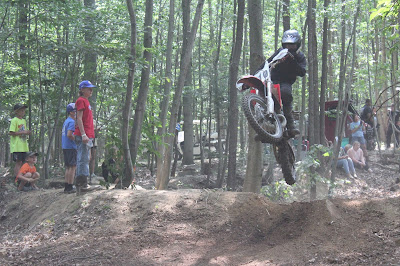 The kids cheer on Cameron Pennington to the win.

The second half of the 2021 season has kicked off with yet another amazing Coyote Run weekend. Thanks to the Kutskel family and their neighbors for the hospitality and opportunity to visit and race. 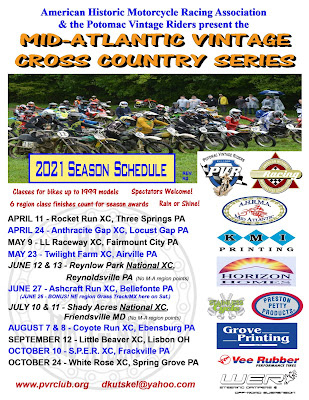 Two more rounds to go - make sure you don't miss out.

A huge thank you to all the volunteers that make this series possible, and thank you to the sponsors that support the regional events: 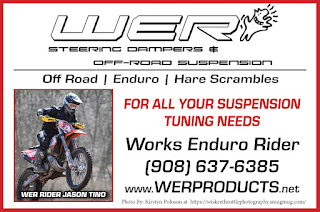 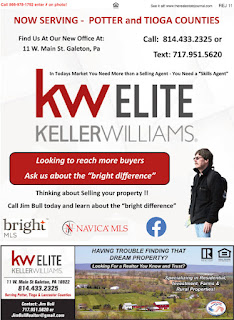