05-14-22 West Creek, NJ was the setting for Rd 4 of the AMA East Hare Scramble.  This was also an ECEA Co Sanctioned event. 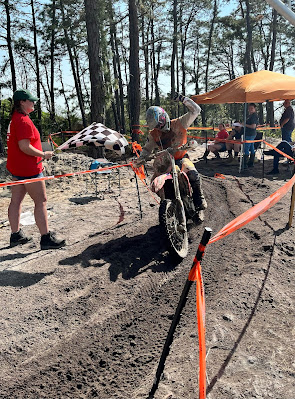 The host club, MCI - Motorcycle Competition Inc. did the best they could as it would rain, non-stop, for 2 days leading up to the youth events on Saturday.  Over 700 racers would bring their bikes to the starting line over the course of the 2 day event.  In 2021, the club was dealt a bad hand with an unexpected Wind Storm that blew down the Vendor, Scoring and and Podium areas.  Not to mention the tape and arrows of the youth main.  Had this been any other club, there would have been a great delay but they got through it all and had a stellar day 2 event with record numbers.  Fast Forward, rain rain and more rain would plague this same venue.  The club was working overtime to get the job done.  The youth events all went off extremely well without a glitch.  The club designed the course and planned for the rain and had no complications.  On Sunday morning the rain would stop and the sun would begin to shine.  The "C" Event went off on time with minor track changes.  Over 325 would leave the starting line.  This would be a 4 lap race over an 8 mile loop for 1.5 hours.  The fastest racers were coming from the Schoolboy 1 and 2 rows turning out 22 minute lap times. 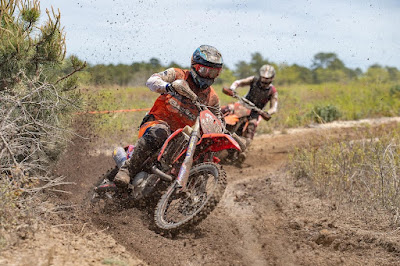 Unfortunately when it came time for the main event, there were 2 breaches in the 12 mile course creating a dangerous head on situation.  This would lead to the race being red flagged after just one lap.  The course was immediately cleared and within an hour a restart would be completed with the breaches repaired.  Hats off to the MCI, ECEA and AMA East staff.  So lets get to the main event racing action.... 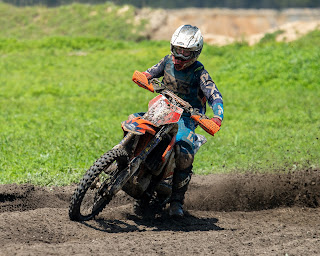 10 AA/Pros would blast from the front row leaving vast rooster tails of sand 12 feet high.  At the 1st turn it would be Kawasaki mounted Wally Palmer. The 1st mile of the course could be seen directly from the start area and they would eventually wrap around directly behind.  As the race progressed, last years ECEA Champion Jason Tino KTM, would take the early lead with Hunter Bush Gas Gas and Kyle McDonal - Beta, directly behind.  On the final lap, the 3 leaders were no more then 20 seconds apart creating for some great racing action.

Spectator points made this event more like an outdoor MX National.  The other battle would be between Mad Max Fernandez - Gas Gas, Justin Lafferty - KTM and Wally Palmer.  The 3 of them were in a close battle for 4th place.  In the end it was McDonal making the last lap charge passing both Bush and Tino.  Fernandez would ring out his 125  and rope in both Lafferty and Palmer for a 4th. The top A rider would go to Kyle Tino - KTM, from the A Open line.  Top B rider would go to Christopher Wiess - HSQ from the B -200 line. 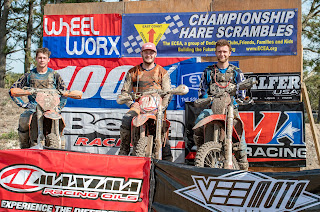 In the morning "C" event, the Schoolboy 1 and 2 racers would set the pace.  After lap 1 it was Schoolboy 1's Carter Przemelewski - YAM with the fastest lap time. Just under 22 minutes.  Directly behind him was Schoolboy 1's Justin Adkins - YAM. Although they were not physically through scoring 1st, their adjusted lap times made them 1st and 2nd O/A.  In 3rd position was Schoolboy 2 Jake Plummer - YAM.  At the mid way point Justin Adkins would suffer a dnf with motor problems.  Although Sunday was dry and clear, the previous rains and still wet sand would take its toll on more then just one bike.  We now had an O/A battle for the lead as Przemelewski would drop back a bit allowing Robbins to settle into 1st.  Then Garrison and now Jake Plummer would join in the fun. Meanwhile Przemelewski's transponder decided it would not ping through scoring on lap 3.  On paper he was back in 11th however this was not the case.  In the end it was Robbins, Garrsion and Przemelweski. 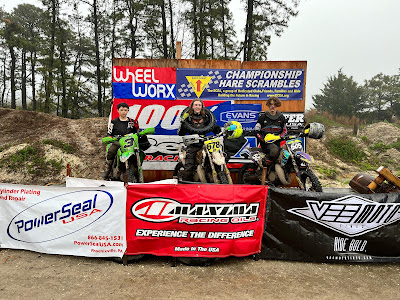 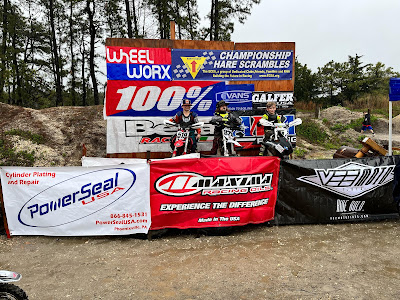