Fathers day weekend the racers of the ECEA and AMA District 6 descended on the coal hills just outside the town of Tamaqua, Pa. This annual event hosted by the Reading Off Road Riders (RORR) is always a crowd favorite. 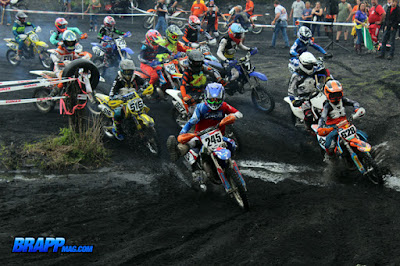 Check out the short video race recap below then scroll down to link to images and results from the event.

Click Here  to get all the details on Pro Action NJ 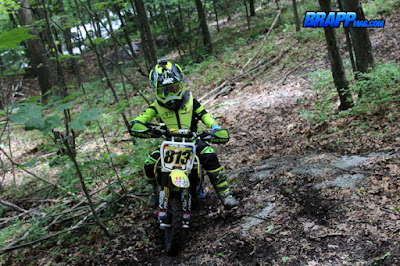 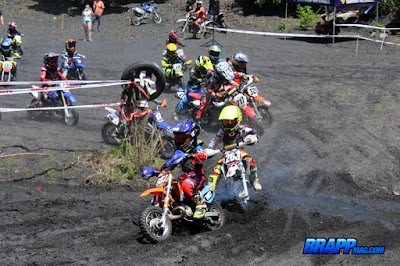 Landyn Dalmasso leads the (4-6) 50cc Air Cooled to the checkers. 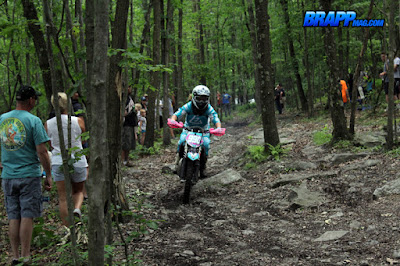 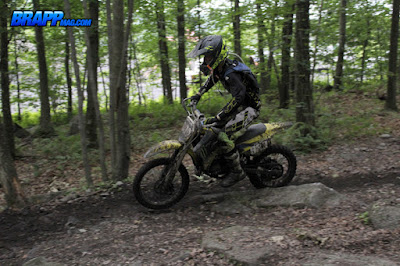 Branden Langley grabs his first O/A win ever in the Youth Division.

Click Here  to link to all youth photos from the weekend.

Nine years ago, the Relay for Life Team from the Bucktail Medical Center teamed up with the Central Mountains ATV Association (CMATVA) looking for an “out of the box” way to raise money for cancer patients and cancer research.
Hence the Renovo ATV Cruise for a Cure was born and over the years has raised close to $75,000 that comes right back to local people who are both fighting and have survived cancer. 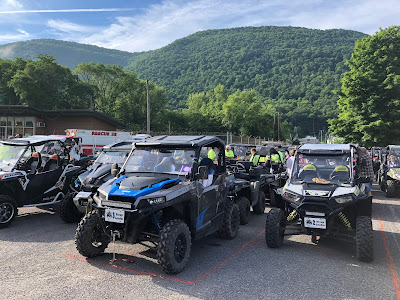 Riders Line Up to Start The 2019 Cruise for a Cure

I learned in speaking with Tim Reeves, the CEO for Bucktail Medical Center, that their facility which was founded in 1909 is not only the local hospital for the residents of both Renovo and South Renovo but is also a Critical Access Hospital which is a designation given to rural hospitals that meet guidelines to receive certain benefits, such as cost-based reimbursement for Medicare services.
Mr. Reeves explained that their Relay for Life team that was started by local cancer survivors was looking for a different type of fundraiser when they stumbled across the CMATVA who was looking for additional opportunities to help open riding areas in the state. 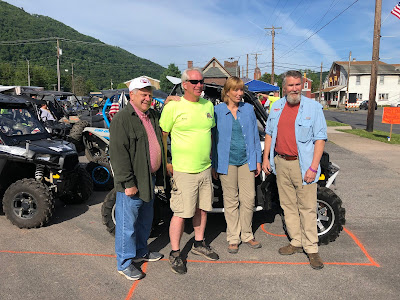 State officials participate in the 2019 Cruise.

The two groups teamed up for what has become the largest fundraiser that the Relay for Life Team sponsors each year. “That first year we had 60 riders,” explained Reeves. Due to the CMATVA’s involvement and the support of the local community the event has grown tremendously. He also wanted to thank the DCNR and the local fire companies and landowners for cooperating and opening the town and sections of trail to ATV traffic that would not otherwise be allowed. 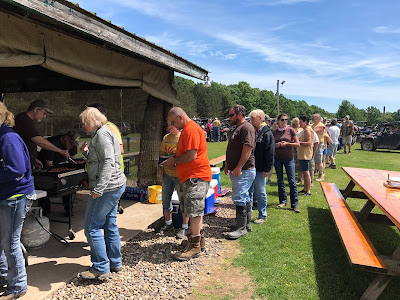 The Cruise for a Cure is a 50 mile controlled guided trail ride that starts in downtown Renovo and South Renovo and travels to the Quiet Oaks Campground in Tamarack, Pa. (Near Cross Fork) There, Boy Scout Troop 137 offered a catered lunch to help raise money for the cause before riders traveled an alternate route back to Renovo to enjoy a Chicken BBQ dinner at the Renovo Fire Company that was included in their donation for the ride. 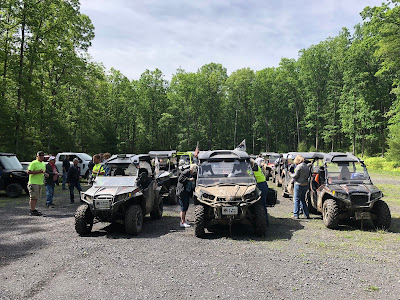 Riders take a break while out on the trail.

In 2019 – 216 machines participated plus passengers. I didn’t have final numbers prior to this writing but I’d bet we had close to 400 total participants. One big treat for this year’s ride was the involvement from the DCNR. Both DCNR Secretary Cindy Dunn and John Norbeck the Deputy Secretary for the Parks and Forestry Service rode along to get a “real feel” for what we love to do. Both have been and continue to be instrumental in helping get trails opened here in Pa. We thank you for participating in the ride and all that you are doing to help the cause of getting both Pa residents and non-residents out in the Wilds of Pennsylvania. 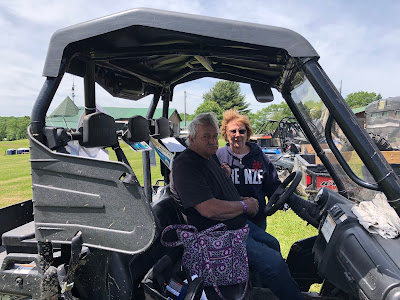 Sandy and Floyd from Friedens, Pa still love to ride off road.

I even had one couple approach me to have me, “let them know” with them both being in their late 70’s, that riding their side by side is really the only means they have to get out into nature anymore. That these trails let them get to places in our great state that they would never see otherwise.
Thanks go out to everyone involved, especially the riders for turning out. It just goes to show that the off-road community wants to give back and what better way to do it than helping someone improve their quality of life.

If you couldn’t make this year’s Cruise and still want to help you can contact the Bucktail Medical Center directly at: (570) 923-1000 or a member of the Central Mountains ATV Association at: www.cmatva.org

Click Here  to read more great off road riding info from the area.

Boyers Farm Romney, WV was the site for Rd 5 of the SXCS. This round, like round 4, was marketed as a Sprint Cross which is also known as a Sprint Enduro. SXCS has hosted a variety of events in 2019. 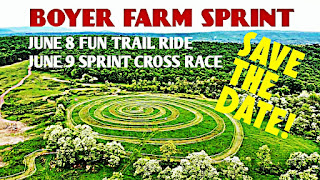 Their opening round was the famous Hangover Hare Scramble which drew over 500 racers. The Sprint Enduros generally do not bring in the masses as a full on Enduro or a full on Hare Scramble. They are more of a hybrid that is slowly catching on. This weekends event challenged the C and B riders to 6 special tests that included Grass Track, Cross Country, Woods Loops and Hill Climbs. Basically the best of everything in one day.

Trail Pros, the track designers, did an incredible job. I just happened to pre ride most of the trails on Saturday just to dust off some cobwebs and had an absolute blast. No I didn’t race it LOL. My talents are more in the admin areas. Even those are as questionable as my riding.

In the morning the youth would break in the soil with 7 Special Tests. Originally advertised as 6 but the kids insisted in a 7th test due too the intense fun. With not a single objection off they went. 12-13 Super mini racer Ranger “Danger” Emmons would immediately start cutting the grass track like a weekday landscaper besting series favorite Kenito #22 by 13 seconds.

Hoping to make a comeback in test 2 woods section, Kenito would make a day ending wrong turn at a downed ribbon putting him onto the adult course and losing a minute: 40. Regardless Ranger would continue with excellent laps times and would hold the lead this day. Kenito would settle for 2nd in class and 2nd for the day. 3rd Overall went to 7-11 85 racer Carter “Pretzel” Przemelewski. 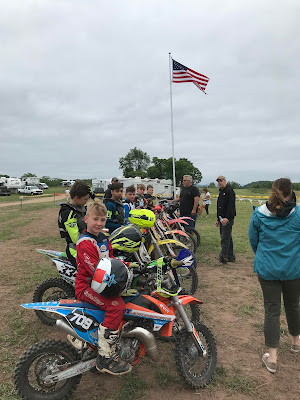 In the Juniors it was Mason Tsakanikas who would charge from test to test taking no prisoners. 2nd would go to Luke “Use the Force” Boyer. Keeping them on their toes and applying the pressure was Tanner Emmons. Was a great day at the Emmons ranch as Maddy Emmons would also take a 1st in 65 novice as well as the overall on a shortened youth course followed by Kasey Gribble and Landyn Dalmasso. 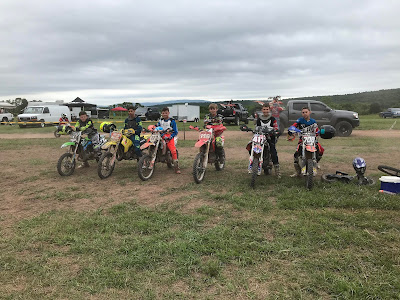 In the main event it was the “Brothers Ross” taking the top 2 podium positions after all 8 Special Tests. “Ride on Motos” Luke and Jake Ross would race in the dust and then the rain as the weather would shift from completely dry and dusty to rain and grease by test 7. Nick Mellinger was holding on to 2nd place most of the day but 3rd place overall (1st in 250A) Jake Ross had his bike set up for mud and when the rain came he had some of the fastest lap times of the day that would allow him to pass Mellinger by test 7.  In the end it was Luke Ross, Jake Ross and Nick Mellinger for the overall. 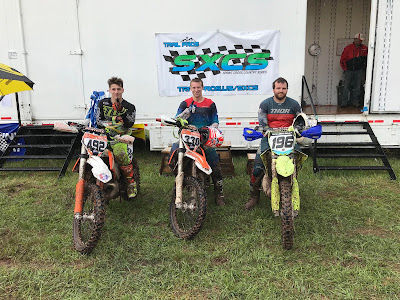 For full results go to
www.trailpros.us/sxcs

Here you have it folks, the last stop in the North East on the way to the grand daddy of all Amateur Nationals. The crew from Doublin Gap had their facility in top notch shape and the track was primo for a gateway to the National Championships coming up a month from now. 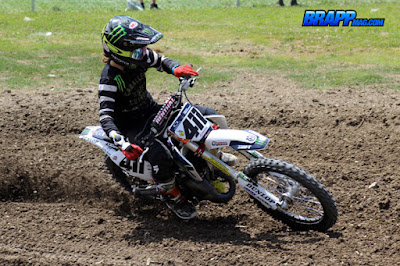 Nicholas Romano was the top rider on the weekend winning
8 out of 9 motos for three O./A's.

Click the video below to get a quick race recap from the event then scroll down to see a few of our local champions along with links to complete results and images from all classes.

Click Here  to get all the details on this exciting event coming up this fall. 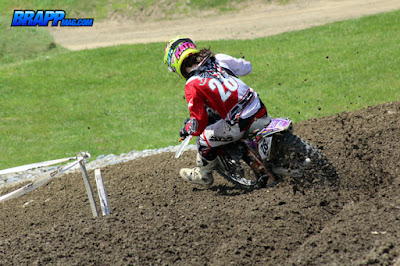 Katie Benson is on her way to the ranch winning all three motos of the Girls division. 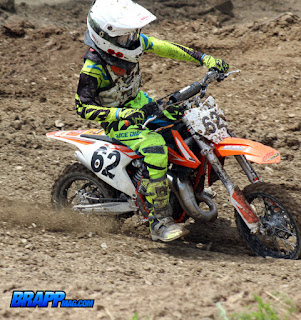 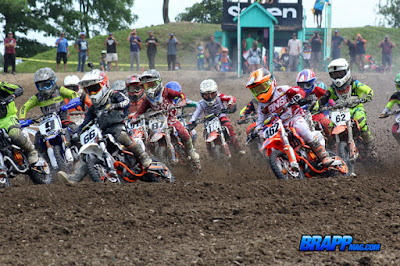 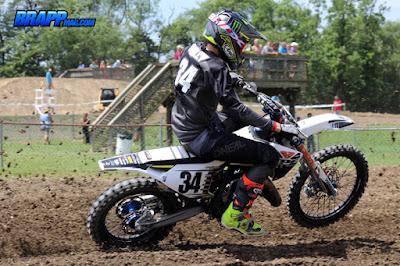 Click Here  to get all the details for this event back at Doublin Gap in September. 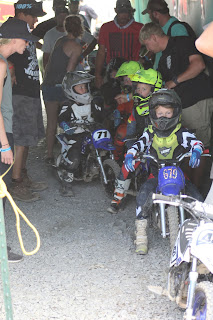 
Click Here  to view complete results from the weekend.

Hosted by the South Penn Enduro Riders - The Skip Stoner Memorial Harescramble went down last weekend near Frackville, Pa.  The event was co sanctioned by the ECEA and AMA District 6. 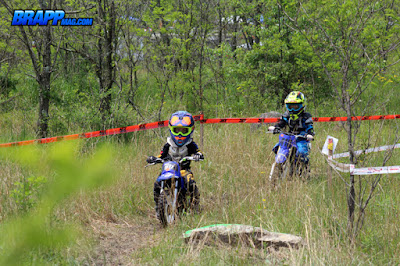 
Check out a short recap in the video below then scroll down to see more of the action along with links to all images from the weekend and complete event results. 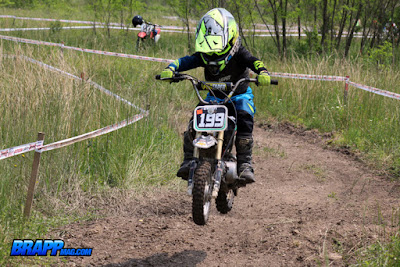 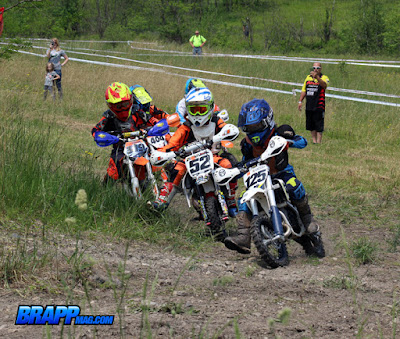 This is how they finished in the Pee Wee O/A 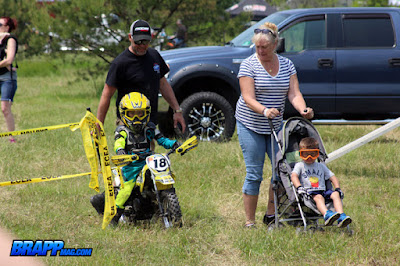 Racer in training on the right. 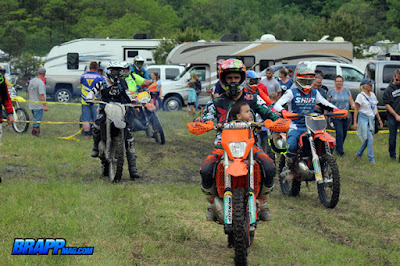 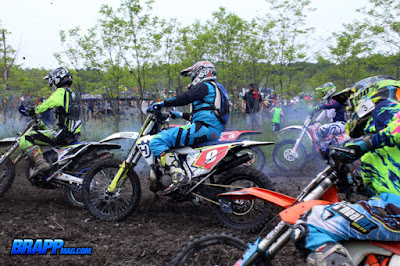 AA start - look far inside right to find your O/A winner on the day.


Click Here  to view all images from Brapp Magazine 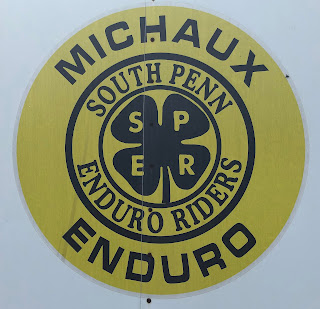 Thanks to SPER for hosting another great event.