By -Richard Colahan and Glenn Hershey

Its a few minutes before the 9:00 am Start (key) time for the enduro and the first bikes are starting to queue up. The usual collection of enduro bikes…Husqvarna’s, Penton’s, Yamaha IT’s, Ossa’s, Suzuki PE’s, some BSA singles and even two Triumph twins. But wait … this isn’t an enduro in the 70’s or 80’s … its 2016! That’s right … the AHRMA (American Historic Racing Motorcycle Assn.) Penton Products LLC Cross Country Series has added a traditional time-keeping enduro to its schedule and 92 Vintage and Post-Vintage entries are set to hit the trail at McKee’s Sky Ranch in Terra Alta, WV.
Set in the scenic northern end of WV, Terra Alta is practically a stone’s throw from MD and PA. The enduro is a wish that land owner Tom McKee had for years and after working with Dave Kutskel’s Mid Atlantic XC Series trail crew…and some experienced enduro hands from the Valley Forge Trail Riders (of PA) … the enduro became a reality on July 23rd. 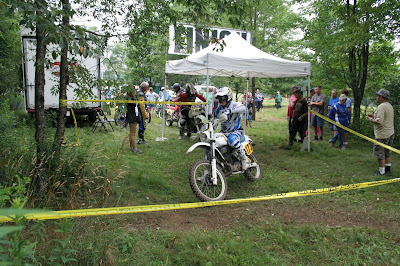 Leading the field on row 1-A was 4 time National Enduro Champion Terry Cunningham (TC), the Grand Marshall for the event. The first section was 4.4 miles long using most of the wooded XC course, with a section of the famed McKee’s grass track added. Approaching the first checkpoint the course dipped out of the woods for another short grass track section providing the spectators with some great action then back into the woods before hitting the check. Most riders dropped from 5 to 12 minutes at the first check but 4 riders blasted in dropping only 2: Cunningham, Fred Hoess, Josh Miller, and Tim Shephard. 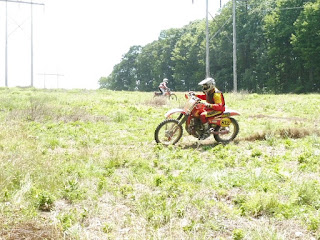 After a mileage reset that got most riders back on time they departed north on a series of Preston County paved, gravel, and rough jeep trails. With modern enduro computers not allowed good timekeeping skills using a clock, route sheet and odometer were needed to zero the next 2 checks. Check # 3 was tucked behind a house and served as a check-in to a tough, rocky, muddy 3.6 mile long jeep trail. At 24 mph only 6 riders were able to maintain the pace and zero the check-out. 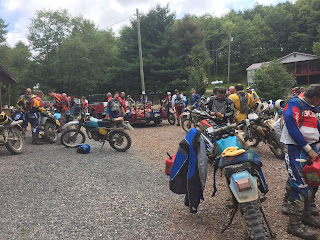 After a 30 minute gas stop / break at a tiny country store next to nowhere, the riders resumed their ride on a mix of gravel and farm roads. Another secret check-in led to another 3.6 mile long muddy jeep trail, but this one eased up a bit towards the end and as a result more than one rider made up a bit too much time before hitting the check-out a minute early! Ouch! The final reset on the course was not to get riders back on time, but to give them a few minutes to enjoy the view north from Gregg’s Knob, the highest point on the ride at 3,200’ feet. 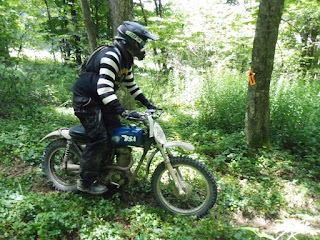 A change to 30 mph for a gravel and paved road section brought them to the final secret check-in just 3 miles from the finish. Back into the woods on some tight single-track trail with 2-track connectors and at the finish check TC, Hoess and Miller are the only 3 riders to drop only 3 points … giving them all 5 late points for the day. However, first time enduro rider Miller had the misfortune to burn the final check-in by about 4 seconds … his only burned check of the day … bumping his score up to 7 and resulting in 3rd place overall.
The tie between Fast Freddie and TC was broken by seconds recorded at the 2 emergency checks with the Grand Champion trophy going to 19 time ISDE Gold Medalist Fred Hoess. ISDT Veteran Drew Smith had mechanical issues early on and dropped 9 points for 4th overall. Tim Shephard and Perry Hodges each dropped 10 points to round out the top 6 scores. Ted Atkinson rode his 1973 Honda Elsinore to a 12 point score and was awarded the Vintage Class Champion trophy (for bikes up to 1974). 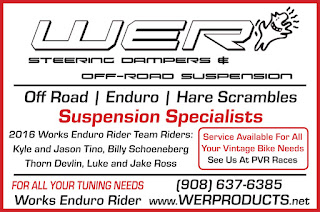 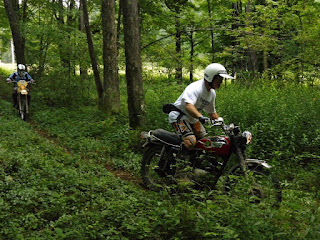 The trail crew was very pleased to take a few points from the fast guys, yet provide a course with a 90% finish rate, including both of the Triumph twins. Perhaps the most impressive ride of the day was by Mark Williams who dropped only 40 points on his 1971 Triumph T100C. As Bill Baird proved back in the day, a 1960’s era Triumph 500 can certainly be set up as a very competent woods bike. However by 1971 the T100C had evolved to basically a street bike with some high mufflers…which is what Mark rode with the only change to some knobby tires. Mark’s comment at the finish line? ... “Never again…on THIS bike!” On the other hand, Joe Zito’s finish on his 1972 Triumph 750 was no surprise…Joe has been riding “the beast” to much success in this year’s Mid Atlantic XC series. But 66 early/burn points didn’t do his score any favors! I’m sure he will brush up on time-keeping for next year.
At the awards ceremony TC was gracious enough to autograph all of the award plaques and also spent close to an hour sharing some stories of his days as a factory Husqvarna racer and employee. Plenty of questions from the gathered riders and some secrets revealed … such as Dick Burleson’s belief that leaking fork seals were simply an indication of a properly working fork … and just how TC REALLY got those parts he urgently needed to fix his Husky Auto just minutes before a big race! 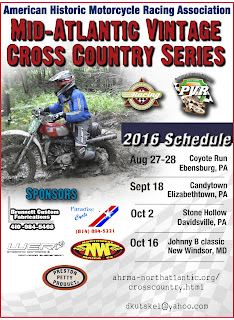 Get More Info By Clicking Here

Special thanks go to the small army of volunteers that worked to make the 1st AHRMA Vintage Enduro a success and especially to Tom and Debbie McKee for not only making their property available but for also persuading the folks of Preston County to share their back roads with some old dirt bikes! For more information look for us on Facebook at AHRMA Mid Atlantic Vintage Racing.

Jim Bull Photo is a division of Brapp Magazine