June 16-17 Tamaqua, PA  Rd 6 of the SRT/AMA East HS was to be a triple crown of sorts.  Co sanctioned by both ECEA and the District 6 HS Series.  Large crowds were expected and the 88 degree day did not dissuade attendance. 575 in total.  When I 1st pulled in I could see the heat distorting the landscape in front of me.  I felt like a roofer.  RORR is known for putting on tough events. In fact next month they will be hosting “Tuff Like RORR” an extreme event.  Held in an active coal mine just outside of Tamaqua PA, the club cut out a 9.5 mile course. 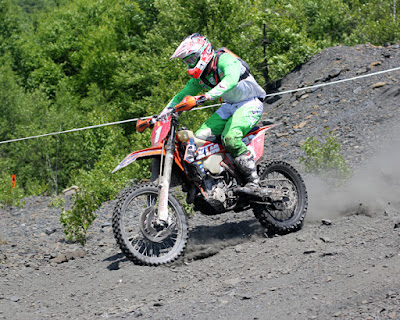 The start of this event is like no other.  Racers are lined up in a literal coal dust field.  If you are not one of the 1st 10 racers into the 1st turn, you will most certainly be sucking coal dust for the next 200 yards.  For the main event 175 brave souls headed into the Coal Laced Mountain with surprisingly few DNF's.  Unlike the Morning C event which saw a 10% attrition rate.  The front line had 8 of the best rock riders on the East Coast.  When the flag dropped it was D6 racer Hunter Bush aboard his Yamaha with a 3 bike lead into the woods.  Behind Hunter was SRT-HUS Wild Wally Palmer and KTM mounted Ryder Lafferty in 3rd.  Fortunately the club provided many passing lines in their traditional single track course allowing racers to pass when the opportunity arose.  At the mid way point it was Lafferty out front with a 1 minute lead over 2nd place Jesse Groemm.  Back just a few was Palmer. This would remain until the white flag lap where Palmer would make a daring pass around Groemm for 2nd. 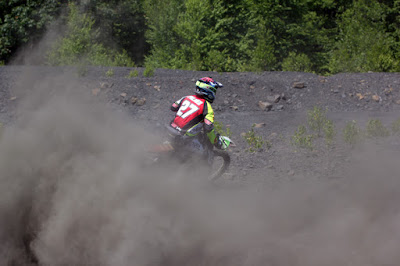 This was Lafferty's day and his 2 minute lead would have allowed him to stop and get a phone number from the Coal Miners Daughter.  Series Points leader Kyle McDonal suffered a 1st lap.  McDonal just couldn't get back in the grove and would have to settle for 5th.  McDonal still retains a comfortable points lead but should not drop his guard.  With no throwaways for the AA's it can change at any time. 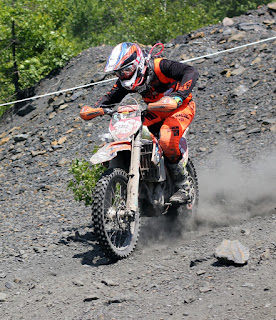 In the Morning C event the newly formed Schoolboy Classes would not take a back seat.  Saturday's 2nd place Overall Racer Brayden Nolette would bring his "Rock Hound Racing" Husky to the front of the pack by the 3rd lap.  Nolette from the School Boy 1 class was battling indirectly with School Boy 2 racer Hunter Keen.  Behind them was C Vet Racer Tomasz Szczachor.  The Morning event was a bit shorter with only 5.5 miles to contend with but there were many dnf's.  This was a true East Coast Hare Scramble. 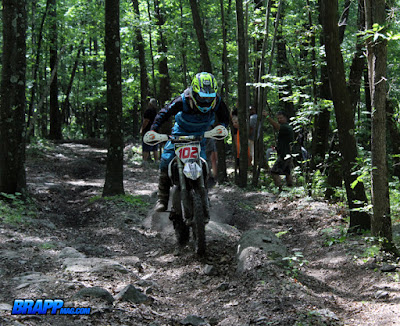 Click Here to get a great deal on your next ride 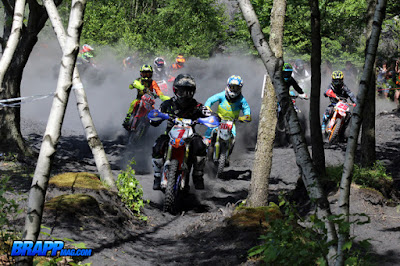 Max Fernandez shows why he carries that #1 plate.

On Saturdays Youth Main, 100 racers lined up for the 4.5 mile event.  Some of the lines had as many as 27 youth bar to bar in the less then opportune starting grid.  Many kids struggled just to keep their bikes up right in the 2 foot deep coal dust.  If you made through the 1st turn you were OK.  Many bottle necks would cause some pretty low speed domino affect tip overs.  After the 6 Rows took off the dust would cover every spectator within 1000 yards.  The 85+ degree temps did not help things.  At the white flag lap it was 14-15 SM Racer Mad Max Fernandez aboard his Mill Hill KTM ripping through the woods with 14-15 SM Rock Hound Racer Brayden Nolette in hot pursuit.  These 2 were pushing each other so hard that we had to wait almost several minutes for the 3rd Overall to come through the gate.  That racer would be HUS mounted Ian Weisman aboard his Hus who also had a commanding lead over 4th. 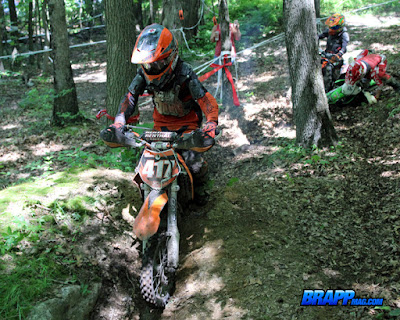 Carter Przemelewski grabs his first O/A win racing in the Jr division against the older kids.

In the Jrs it was Overall first timer Carter Przemelewski abaord his KTM from the 7-9 65cc class.  Carter would pass the entire 10-11 65cc class.  This was Carter's break out race.  Watch this kid. 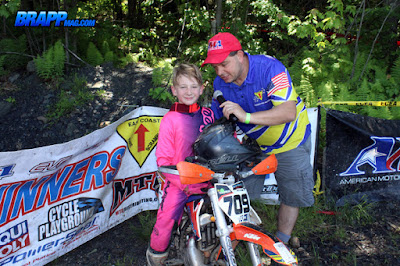 In the Pee Wee 50's it was no stranger to the top of the podium Mason Tsakanikas aboard his J&R KTM.  Mason is dominating the ECEA and AMA East Series.  He will be hard to stop.

Click Here to link to all youth class results

Click Here to see more images from all youth classes 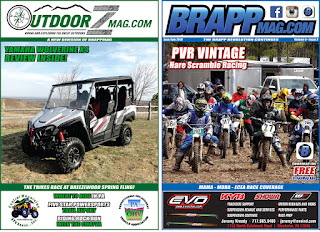 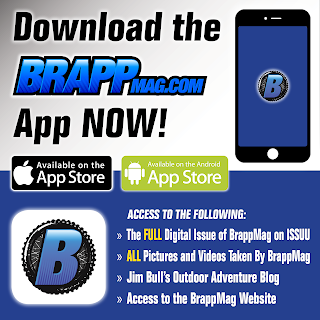