What a great season 2022 has been, and as per recent tradition White Rose Motorcycle Club (WRMC) gets to close the year out with a big ‘ole exclamation mark. The amazing crew here at the scenic and historic club grounds in South Central Pennsylvania never disappoint in their efforts to put together a stellar event. While it is always bittersweet knowing that the off-season is just days away, the event has always ended leaning far more toward the “suh-weeeeet” side than “bitter”. This year promised even more fun than usual since the Mid-Atlantic’s (MA) inaugural promotion of motocross racing had targeted WRMC for the climax of its season as well. Despite the added efforts needed to prepare for two events on the same weekend, the club members pulled everything together brilliantly! 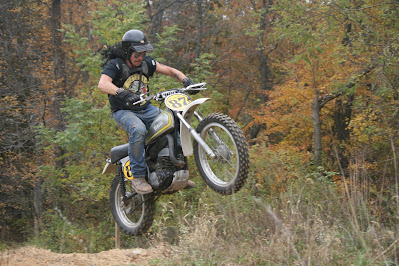 Motocross was first on the weekend’s agenda and took place in the large open field to the east of the club’s famed hill climb. This area had previously housed a long, turn-laden grass track that was featured prominently in the 2021 cross-country course serving as a final battle royale for position just prior to the checkered flag. While abundantly enjoyable, after seeing what was successful at other rounds of the series, the WRMC team felt that a reconfiguration was in order. Seeking a bit less corn maze and a bit more Carlsbad, the course’s final iteration was decided upon days before the event, and it is a good one. The more power the better here, not that it is a requirement for fun, but the course will take everything a 500cc two-stroke can offer…or the rider is able to provide. A long stretch follows the rubber-band start with a slight arc toward the first hard twists, a one-eighty left and a ninety right leading into the first tame jump through a fence row. Several esses bring the riders over another fence row launch and back into view of the collecting crowd of onlookers by the start area before sweeping back uphill. Jumping over a natural incline hurtles riders toward the highest elevation of the track and some great natural whoops. A few long straights connected by hard packed turns funnel into a downhill ski jump right before the scoring tent followed by a hard left, over a kicker jump, and grab a whole lot of throttle for the vast lefthand sweeper past the congregation of spectators as you rejoin the start stretch for the next lap. Fast, competitive, vintage-friendly, and downright fun. The only negative was a bit more dust than hoped, but in a dry year it is hard to combat. Overall, the gates were jammed full of appreciative racers making it clear that WRMC knocked this first attempt at MX out of the park. 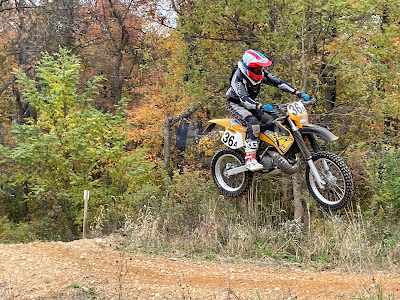 Following Saturday’s racing, the MA crew hosted an appreciation picnic-style dinner for everyone under the porch roof of the club’s pristine facility and kicked-off the Halloween celebration that has become an integral part of the season-ending event. After everyone had their fill of fried chicken, salads, sandwiches, and such, the children took part in a trick-or-treat session up-and-down the pits while impromptu gatherings took shape throughout in celebration of Halloween and vintage motorcycle racing kinship. A few strange anomalies were noticed throughout the night to add to the Halloween lore, such as the club’s UTV appearing to drive itself to the edge of the woods, and a strange rustling of the chains at a distant access gate and the visage of a shadowy figure. Oddly, all these incidents seemed to coincide with multiple claimed Sasquatch sightings throughout the evening. Assuming that the Yeti was simply a competitor trying out his/her costume for the next day’s cross-country races where we would find out the true identity proved to be false hope as Bigfoot did not make the starting line on Sunday. True cryptid or costume? If costume, then who? Shouldn’t it be taller? These answers may never be known but be sure that the legend will be told next year and beyond with eyes peeled for another glimpse of the interloper. 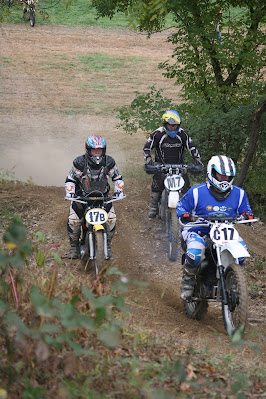 Apart from Sasquatch, the cross-country race brought out a menagerie of costumed characters to celebrate the spirit of the holiday and vie for the coveted people choice award.  Perhaps aided by his crazed orange smoke-bomb fueled lap around the morning’s vintage race start, but certainly earned by the top-notch execution, Randy Bennett took the honors with his Animal (of Muppets fame) costume! Awesome job by everyone (Slash of G’N’R, Teenage Mutant Ninja Turtles, Headless Horseman, Combat Wombat, The Joker, Bugs Bunny, and others) for competing in costume and keeping this fun going each year.

As for the cross-country racing, it was epic as expected at WRMC. There seemed to be a full-house on each of the three race’s starting grids where line-by-line riders powered their way up the step-up jump uphill. A quick jaunt through the woods on the eastern edge of the property dumped the competitors right into the meat of the motocross track, but only for a short while as the course dipped into the tight confines of the fence row separating the main sections of the MX area. Shooting out of the fence row, the course made a long-haul bee-line across the field and into another rooty, tight section before hitting the woods proper for some nice flowy singletrack that was a favorite from last year but run in reverse. A sweeping dirt road followed with a row through the gears before an abrupt whoa sends you back into a mile or so of a combination of fresh cut singletrack and existing trail. From here the participants would blast from the wood’s edge and out into the spectator’s favorite, a stretch of motocross style tabletops near the plateau atop the hill climb mountain. Familiar trail brings the loop around to the incline that has served the club’s successful hill climb events for nearly seventy years. Eventually the course makes its way back toward the pit area using the playground of challenging elevation changes adjacent to, and across, the hill climb track. The loop’s return to flat ground is beyond brief when it turns back into the woods and up once again headed for the valley that bisects the mountain and the MX course to the east. Winding back and forth, up and down, through plenty of off camber single track with ample exposed roots, the course makes its way to the far end of the valley where it terminates near the MX course before reversing on itself to run the valley back, albeit on the parallel side to the ingress route. More of the same challenging, but fun, terrain resides on this side of the valley as the course winds to a close in tiered descent to the scoring tent. As always, the terrain and flow are a treat at WRMC, and it serves as a fantastic venue for closing out the season and settling any championship scores that were as yet undecided. 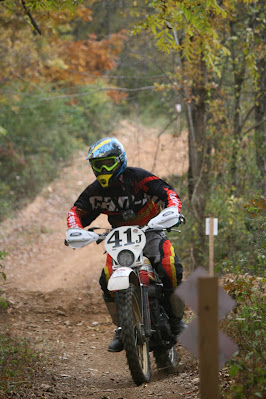 Another awesome event at WRMC with perfect weather, beautiful fall-foliage, fun-filled Halloween activities, and stellar race action. Many thanks to the club in general for allowing AHRMA events to use its facilities. Special thanks to the WRMC track crew for all the work that goes into setting up a weekend event: Geoff and Dewey Kemp, Rick Albert, brothers Grant and Brett Reichart and their better halves Jessi and Emily, all familiar faces to the MA family. As awesome as the event was, so to was the now closed 2022 MA racing season where the steady leadership of Dave Kutskel and the dedicated work of a small army of seasoned volunteers took the risk of adding motocross to their already busy schedule. Somehow, with the labor from Dave and team as well as the efforts and enthusiasm of the network of racers, families, and friends, the series managed to increase overall cross-country participation rates over the prior season yet again despite a plethora of negative socioeconomic factors. Certainly, the sponsors are a major part of the success as well and sincere thanks are in order for the folks that supported the series throughout the 2022 season: Potomac Vintage Riders, Preston Petty Products, Stainless Cycle, Grove Printing, KMI Printing, and Horizon Homes. To see the results for the entire weekend please visit https://www.ahrma.org/ahrma-mid-atlantic-region 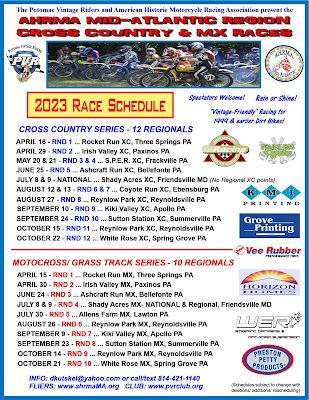 Looking forward, based on the success of the 2022 season, the plans for 2023 are bigger and better! The schedule is intriguing, exciting, and is out now! Be sure check the link above for the details.  Also, before the 2023 season starts get your bike(s) prepared right by making plans to attend our premier sponsor, Potomac Vintage Riders’, epic swap meet in York, Pennsylvania. The January 22nd event is a “can’t miss”! Details at https://www.pvrclub.org/swap_meet 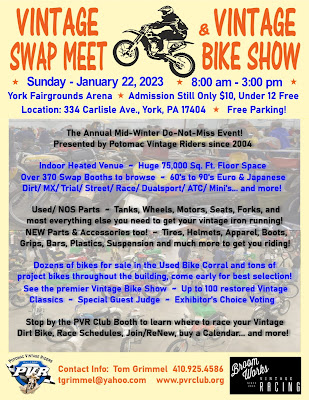