With over 800 racers coming thru the gate, It was a full house at Round 2 of the AMA East HS. 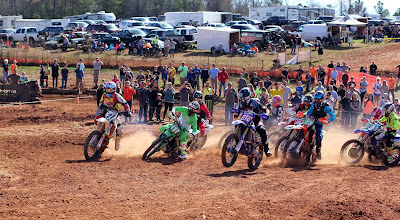 The main event front row kicks off RD 2 from  www.mideastracing.com

This round would be co sanctioned with the Mid East HS Series. Mild rain on Saturday created a tacky clay for Sundays events. The 10 mile main event had its share of rolling hills, tight single track and squirrelly hill climbs.  The layout provided a vast array of spectating. No matter where you were standing you were treated to gobs of action. 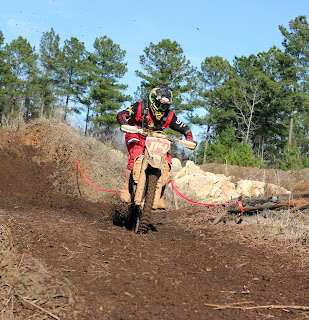 14 Pro Riders from as far away as WA State lined up to do battle. Behind them were two stacked rows of local AA racers. Following them were the rank and file A’s and B’s. The start of the event had three off camber, cork screw turns that provided plenty of action for the spectators. Ricky Russell would get the Holeshot but could not rest as Bollinger and Strang were right on him. As the racers entered the hillside, Bollinger would hammer past Russell. After the 1st lap, Bollinger would pull away from the pack with a 30 second lead. 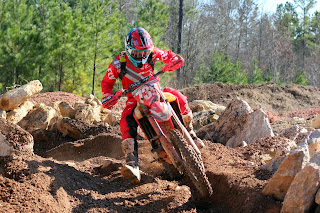 Trevor Bollinger led most of the race but got passed by Strang on the last lap.

Russell would drop to 3rd with Strang securing 2nd. This would remain this way till the white flag lap when Strang would begin to make his move for the lead. Halfway through the final lap, Strang made his way to Bollingers back fender. 2 miles from the end Strang would make the pass and he just let loose and pulled away from Bollinger. When the checkered dropped it was Strang by 30 seconds.  Ricky Russell would take the final podium position.

In Sundays morning event, the Amateurs, Seniors, Schoolboys and Women were treated to the exact same course that the Pros would run later that day. 10 miles of damp red clay, everyone's favorite. 250 racers would line up to do battle.  The top riders were from a variety of classes.  1st place went to David James from the A Super Senior Class, 2nd would go to Cole Lail from the Schoolboy Class and 3rd OA position to Vance Earl from the A Masters.

Click Here to get in touch with series sponsors Bromley Motorcycles.

In the Youth Main, talk in the pits was about PA's Mad Max Fernandez and local racer Tyler Palmer.  Both have a reputation of getting it done and this was not exactly Max's terrain.  Max a rock racer and Palmer, new to the class fresh out of the 12-13 Super mini had his work cut out for him.  For 2018, both racers will also be contesting the GNCC series.  When the flag dropped it was KTM Mounted Dylan Hicks and KTM's Max Fernandez with an early battle for the hole-shot. HSQ mounted Palmer was in the mix and in the top five as they headed into the rolling hills.  After the 1st lap it was Max out front with Palmer about 30 seconds back.  It would actually stay this way for most of the race.

KTM mounted Max Rust would battle with Hicks but Hicks would soon fade allowing Rust to secure 3rd by the 6th lap.  The high speeds and unexpected, extended elapsed times were giving pit personnel a headache as many were now needing to pit for fuel.  Fortunately the top racers were equipped with large capacity fuel tanks so the fastest pit strategies were not going to be a factor.  In the end it was Fernandez, Palmer and Rust all from the 14-16 Super mini class. 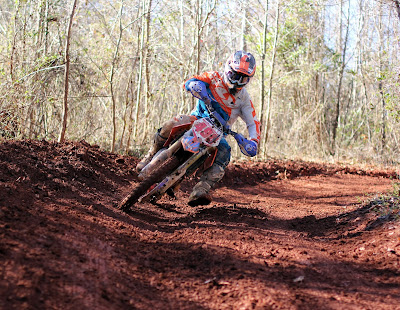 At 8:00 am, 36 Pee Wees racers would line up in two rows, 4-6 and 7-8.  With lines stacked and parents anxiously awaiting the 10 second warnings were given and the racers were off.  Many of these kids don't wake up until mid way through the 1st lap.  These kids were by far the toughest.  On Saurday all the quads raced so there was a nice slippery surface that would send the 50's sliding like synchronized swimmers, only these 50's did not have it in their plan.

Some of the uphills took their victims early leaving course workers with their hands full.  By the 2nd lap, most of the Pee Wees would find their groove.  The one youth who found his groove before the rest was KTM Racer Mason Tsakanikas out of MD.  Tsakanikas, also part of the "Rock Hound Racing Team" was not in the rocks but someone forgot to tell him. Mason would take the lead early and never look back taking the O/A win and 1st in class.  2nd and 3rd would go to Caleb Wood and Ethan Hardwell respectively, both aboard KTM's. 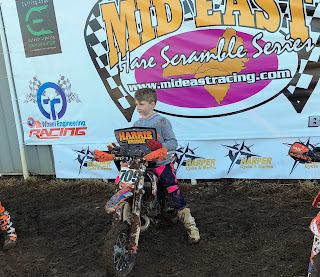 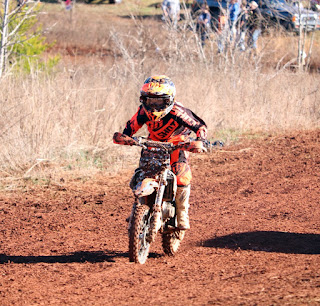 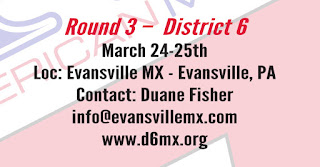