Below 0 Temps did not stop 250 determined racers from attending the 2018 Hangover Hare Scramble.  AMA East was especially excited as this was the 1st time as an AMA Sanctioned event.  It was also to be the opening round for the SRT/AMA East Hare Scramble Championship Series.  Billy Schlag and the staff at Trail Pros, with the help of Southern Maryland Dirt Riders (a District #7 club) delivered one heck of a venue.  I cannot begin to imagine the hard work that went into this event.  The cold temps leading up to and during the event set all kinds of Mid Atlantic records.  The 5 lap main event would test mind, body and bikes. 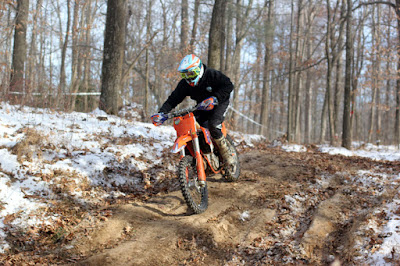 In the 9.5 mile Main event it was KTM mounted Zack Nolan with the Hole Shot.  Behind him was KTM mounted Nick Marti with Beta mounted Kyle McDonal giving chase.  A bar to bar battle immediately ensued on the 1 mile moto-x track between the top 3 before heading into the woods.  Exiting the woods and re-emerging onto the 2nd Moto-x, it was still Nolan with a slight lead over now 2nd place McDonal.  McDonal leaving behind his Beta 2 stroke for a 4 stroke on this day, was working great for him.  Marti and Yamaha mounted Shawn "Woodsy" Jackson were now battling for 3rd position. 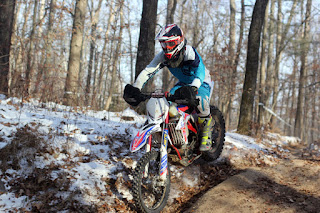 At the half way point the Pro line did not see any position changes however A Open racer Tanner Way, aboard his Beta, would sneak up on the Pro Line and take the 3rd Overall position.  Many of the top A and B riders were ill equipped and were forced to pull off the track due to the cold conditions.  If you didn't have complete hand guards your day was over early. 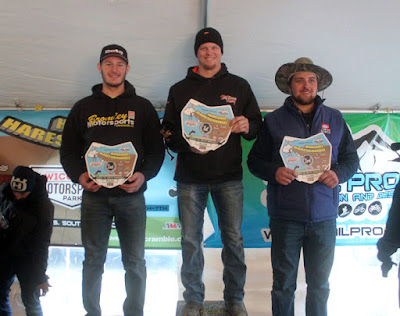 When the checkered dropped it was Nolan with the win by less then 30 seconds.  McDonal would settle for 2nd and A Open racer, Way, with 3rd O/A.

The C event who had started earlier in the day, endured even colder temps.  14 degrees was displayed on the local thermometer.  The 90 minute 4 lap race win went to Schoolboy 1 rider Dakoda Hardy aboard his KTM.  2nd place Jacob Stirn and 3rd place Rigobarto Romero, both from the Open class. 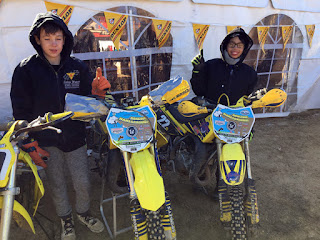 The Heroes in my book for this day however would go to the Youth racers.   With a 9:30 am start, the temps were still in the single digits.  If you didn't have large hand guards and ski gloves, your day was over almost immediately.  28 brave determined youth would line up for the 4 lap, 1 + hour event.  On the 1st lap it was Marina Cancro aboard her Team Green KX100 from the 14-15 Super mini class.  Giving chase was 14-15 Super min racer Julian Wojcik aboard his "Team Perfect Storm" prepped RM100.  The 2 would exchange positions for the 1st 2 laps but Cancro would relinquish the lead to Wojcik due to some crashes.  Wojcik would stay in the lead for the remainder.  2nd O/A would go to up and coming racer Griere Moir aboard his KTM 85 from the Jrs class.  Way to go Griere!  3rd O/A would go to fellow "Team Perfect Storm" member Kenito Held from the 85 Sr Class.

On Saturday afternoon the Pee Wees would be the terrain testers.  The 30+ minute event did not disappoint.  "Lil" Johnny Probst aboard his Fun Factory Cobra would take the early lead and begin to check out.  In 2nd place it was "Team Rockhound" racer Mason Tsakanikas and in 3rd position "Use the Force" Luke Harding aboard his KTM.  Unfortunately for Probst, lack of hand guards and light gear forced him off the track in extreme pain.  His hands were iced allowing Tasakinkas to take the lead.  3rd place racer Harding would also succumb to the frigid conditions.  Neither Harding or Probst were going to surrender for the day.  After a brief pit stop and change of gloves, the 2 would re - enter the track and finish.  In the end It was Tsakinaikas, Probst and Harding.

Congratulations to all the racers who would venture out this weekend.  The wind chill at times demonstrated temperatures up to 20 degrees below 0.   See you at Round 2 of the SRT/AMA East HS which will be hosted by SETRA on 02-17-18 @ Battery Off Road Park in SC.