08/11/19 Battle Creek MI. SRT-AMA East HS Round 6 was co hosted by District 14’s Battle Creek MC. Voted the best HS of the year unanimously by racers and spectators alike every year they host. The BC MX track has the perfect combination of MX, technical trails and challenging enduro x sections.

The course is always well marked and flowing. The 8 mile main event would include all levels. AA, A, B and C. Slated for 2.5 hour event resulted in 100’s of hours of individual entertainment. Spectating is absolutely off the charts. You are guaranteed to see the racers throughout several sections of the track due to the clover leaf design.

Byron Kibee and his crew never disappoint. 10 AA/Experts would line up to do battle. Local favorite Tyler Vore Gas Gas and visiting Kyle McDonal Beta were the 2 to watch. Vore is preparing for the 2019 ISDE and McDonal is maintaining his points lead for the EHS. When the flag dropped, it was more like the 1st turn at the Anaheim SX.  10 wide and elbow to elbow.  When the group hit the MX section it was Vore out front with Talon Soenksen YAM giving chase. Shane Spangler KTM was sitting in 3rd.

East Coast racers McDonal and Bush were getting off to a not so great start but were carving their way through the pack. At the midway point Vore, with almost a minute lead would put it on cruise control. Unfortunately Spangler, Bush and McDonal entered the passing lane and began to close the gap. Now we had pitting strategy and lappers thrown into the mix. Before we knew it Vore and Spangler were bar to bar turn to turn. A brief mistake for Spangler allowed McDonal to move into 2nd. McDonal would then have a get-off on the MX track allowing  Spangler to regain 2nd. Hunter Bush would secure 4th position   It stayed this way to the end. 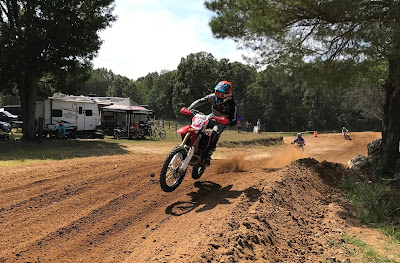 In the C class which actually ran on the back rows of the main event, would have some pretty interesting results. Not what you would expect on a track of this size. Three Teenage racers from row 10 on small bore 125’s would immediately get out front and begin a battle that lasted for 6 laps. Team Perfect Storm’s  Kenito Held - SUZ, Bode Meylan KTM and Jacob Mohnke YAM would pass most of the A’s and B’s by mid way through the event. Held and Melan would exchange the lead no less the 5 times. On the white flag lap, Held would make a daring pass on the final MX section Over Jumping the landing areas and would establish a 4 second lead in the final turns to the checkers. This was Kenito Helds’ day as earlier in the morning he would Overall the Youth Event. Mohnke would secure 3rd about a minute back. 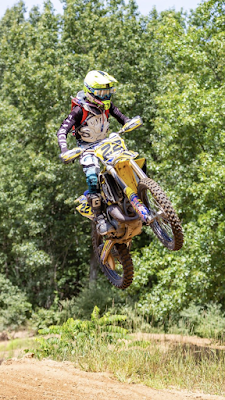 In the Morning Youth event Kenito Held would lead from start to finish aboard his Team Perfect Storm prepped RM85 Big Wheel. 2nd place was local favorite Patrick McMillen aboard his KTM and 3rd Would go to Ryder Sigety aboard a dad prepped YZ65. This kid will be one to watch now and in the future. Kudos to his mom Stacey for providing the attached photos. 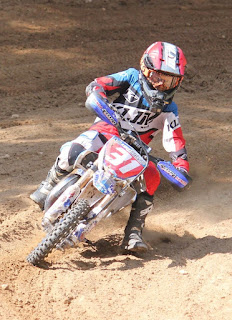 In the Pee Wee  50 class Enzo Zaccaria would make a last minute appearance. Enzo didnt immediately take the lead but was 3rd into the 1st turn. By the 2nd lap he had moved into 1st passing local talent Benton Richardson and Aiden Campbell. The 2 tried frantically to keep Enzo on the radar but it was not to be. Enzo, turning out 20 second faster lap times separated himself from the rest and would take the checkers. AMA East 50cc points leader Camryn Popek was in attendance but a mechanical issue prevented him from making the gate. Camryn would later redeem himself by taking 4th OA in the Jrs class. 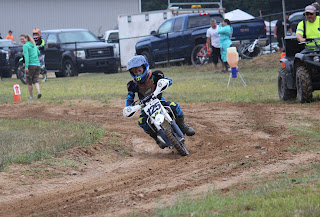