Round 4 of the SRT AMA East Hare Scrambles Championship Series

05-05-19 - Holiday Mountain Monticello, NY - Round 4 of the SRT AMA East Hare Scrambles Championship Series hosted by NETRA's Tri State MC.  One day the norm going to be, " Hey, you remember that weekend it was sunny and dry?" 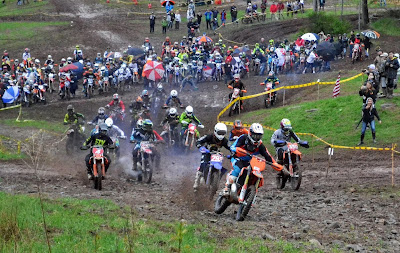 4 rounds have passed and 3 have been rain soaked.  Rd 4 was no exception.  Constant rain on Friday and Saturday left the trail workers scrambling to provide a safe and fun event.  The venue is a ski resort with you guessed it, mountainous trails.  By the middle of the youth event, we had documented waterfalls on the trails.  Luckily the mountain terrain consists of loamy dirt with a rock base.  As wet as it was, there was still plenty of traction and the course held up well for all the heats.

In the main event 20 AA's got their lift tickets and lined up for the 2 hour event.  This was one of the largest AA turn out thus far for 2019.  In the 1st turn it was KTM's Nic Kordana with the holeshot.  Nic would stay in the lead for most of the 1st lap.  Gaining momentum in 2nd place was GAS GAS mounted Brendan Riordon.  As they came out of the last woods section it was Riordon in the lead but only by a few seconds.  These 2 would trade up no less then 5 times throughout the event making for some incredible racing action.  KTM's John Kelley was back in 3rd trailing by about 40 seconds by the half way point.  Last years Holiday Mountain winner, Beta's Brian Dussault, suffered a not so great start and was climbing his way through the pack in 6th position. 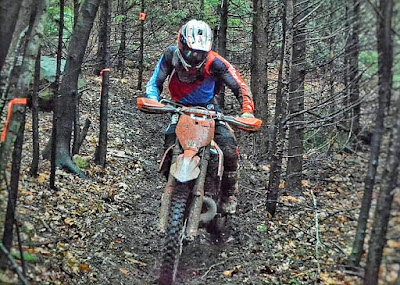 In the C event, the overall winner was emerging from the 250 line.  James Baker and Dan Forgione would immediately challenge each other at every uphill and downhill.  With a semi clear field, they would follow the well defined ruts from the earlier youth event.  The 1.5 hour event would declare Forgione king of the hill and a final push by Vet racer Brendan Dwyer would bump Baker down to 3rd for the day. 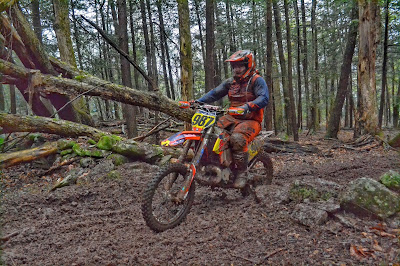 Dan Forgione holds on to win the C main.

In the Youth Main, 60 young warriors would be the advance party into the rain soaked track.  Just getting to the starting line was a challenge for some of the smaller bikes.  If you got the hole shot it was best to just stay on the pipe and don't look back.  Any racer that turned back found themselves in a 180.  The youth actually ran the same loop that the C Racers would ride later in the day.  On lap 1 it was clear that Kyle Grenewicz (12-13 Super mini) was gaining on the O/A leader Alex Kiander (14-16 Super mini).  directly in pursuit of Grenewicz was "Team Perfect Storms" Kenito Held (12-13) Super mini.  By the 2nd lap, both Grenewicz and Held would pass Kiander and begin their won battle.  Grenewicz kept it smooth and persistent in the rocks and Held would air it out on the MX track.  Unfortunately for Held there was more rocks then MX and he would have to settle for 2nd this day.  Holding on to 3rd for the day was Kiander. 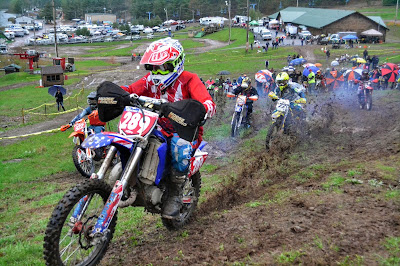 Kyle Grenewicz grabs the holeshot and the win in the youth division.

For full results go to netra.org