It was Bush at Bushkill! Sorry I couldn't resist.  Hunter Bush took the hole-hot and the win this weekend at the D6 - Bushkill Valley Hare Scramble.  This was no easy task as he was being stalked the entire time by Multi ECEA and AMA East #1 Kyle McDonal. 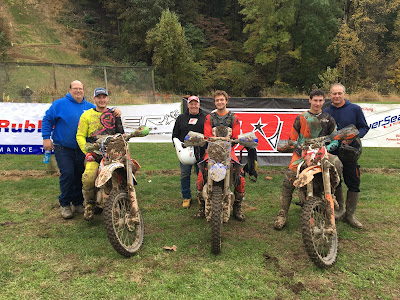 At no time did the two lose sight of each other.  Behind them in 3rd position was the youngest AA from the Millville, NJ training camp, Justin Lafferty.  For the 1st 3 laps the three would take turns displaying the fastest lap times of the day.  By lap 6, Lafferty would drop pack to a just under a minute and McDonal would move within 15 seconds of Bush.  The course was 50% elevation changes due to Bushkill Valley being exactly what it says.  This club also hosts 2 AMA National Hill Climbs.

The other portions of the track were extremely greasy grass tracks.  McDonal aboard his Bromley Beta 4 stroke and Bush aboard his Yamaha 2 stroke were using completely different lines which provided excellent spectating for the fans on every portion of the five mile loop.  On the start of the white flag lap Mcdonal moved within three seconds of Bush but just couldn't make the pass.  What was interesting was that none of the top three didn't pit. 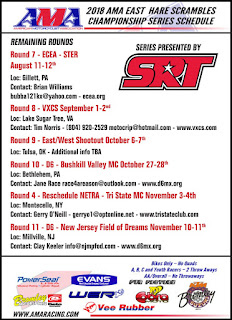 We spoke with Greg McDonal, Kyle's dad and pit boss who advised that they were experimenting with the 4 stroke and its range ability on one tank.  Unfortunately on the last uphill, Kyles bike began flame out allowing Bush to pull away.  We don't know if it was the low fuel level of the gas or the wide open racing the two were demonstrating.  Fortunately for McDonal, he only needed to finish this round to seal up the #1 plate for the AMA East HS Series and that he did.  Congratulations to Kyle for the #1 plate and to Hunter Bush for the win.  Top A rider goes to A-250 racer Jason Tino aboard his Hanover Powersports KTM.

In the morning C event it was School Boy 1 Racer Julian Wojcik aboard his Bromley-Team Perfect Storm Suzuki.  Julian is also leading the AMA East School Boy points.  2nd pl went to Brandon Woolf in the C Open class and 3rd went to Ryan Elseroad from the C lights.

On Saturdays youth events we were once again dealt a soggy hand.  Rain, rain and more rain. These kids toughed it out!  In the Youth Main it was KTM racer Cole Hickman taking the top podium finish away from local favorite Trevor Kibler.  Trevor a fierce youth competitor would fall victim to a leaking water pump seal just prior to the race start and had to ride gracefully in order to finish.  Hickman, would make a gentlemen s pass on Kibler for the lead on lap one.  Battling his way through the pack for 2nd overall was 12-15 racer Ryan Gribbin.  Kibler would settle for 3rd. 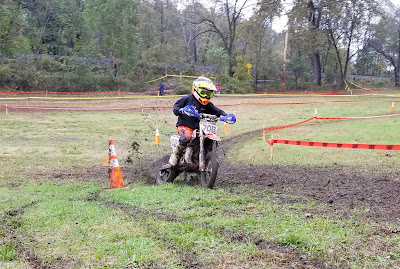 Austin Tsakanikas wraps up another title.

In the Juniors Heat top finisher was last years #1 plate Austin Tsakanikas aboard his Rockhound prepped KTM.  Austin defending his title and has locked up his title once again in 2018. Congrats Austin.  In 2nd for the day was Yamaha mounted Ryder Sigety followed by KTM Racer Levi Richmond.

Special thank to the crew at Bushkill Valley - Freemansburg MC's for their hard work, dedication and determination putting on one phenomenal event.