Round 10 of the AMA East HS Series was hosted by The Ridge Riders MC, also part of the ECEA HS Series. 13 AA racers lined the start for what was to be the showdown of all showdowns.  When the 10 second announcement was made it was clear that three racers were vying for the 2017 AMA East #1 plate. 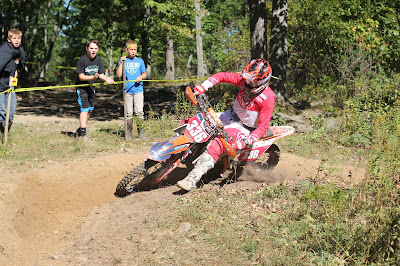 Depending how this race ended could decide the outcome with still one race remaining.  Separated by only a few points, Wally Palmer, Kyle McDonal and late starter Ryder Lafferty were there to re arrange the real estate.  When the Flag dropped it was #3 Yamaha Racer Shawn "Woodsy" Jackson 1st into the woods being pursued by Palmer and Lafferty with McDonal just a few positions back.

The racers were immediately thrown into a series of twisting rock trails.  Within in seconds the positions would change.  Lafferty would make his way to the front with "Trooper" Thorn Devlin moving in behind.  About 3/4 mile in there was an abrupt uphill with large rocks and craters.  There  Lafferty would get ejected from his bike and he would lose four positions.

Unfortunately Lafferty could not put it on cruise control as the Trooper Thorn was only two seconds behind.  By lap three, Devlin began to feel the effects of the rock laden trail and would drop back and allow Tegan Temple to move into 2nd.  Back in 6th-7th position was Palmer and McDonal doing battle as every position would make or break McDonal.  The two would swap positions for two laps.  when on lap four, McDonal would suffer a cracked engine case.

For most this would be a game ending event.  Not for McDonal and his Beta Crew.  McDonal pitted and would change his clutch cover and got back onto the track in under 10 minutes.  Unfortunately it would put McDonal in 10th place, ending his chances of retaining his 2016 #1 plate.  By the white flag lap, Lafferty would increase his lead over Temple by a minute thirty.  Hunter Bush now would take over 3rd position as Devlin would pit with suspension issues.

When the checkered flag dropped it was Lafferty by two minutes with Temple in 2nd and Bush in 3rd.  With one round remaining the unofficial points are Palmer 172, Lafferty 161 and McDonal 133.  Round 11 to be hosted by VXCS in Charlotte Hall, MD on 11-04/05-17.

In the morning event it was Schoolboy class leader Mike Beeler Jr who has locked up his class with 2nd place Mad Max Fernandez locking up 2nd for the year.  Sean Covert from the C 250 line would round out the top 3. 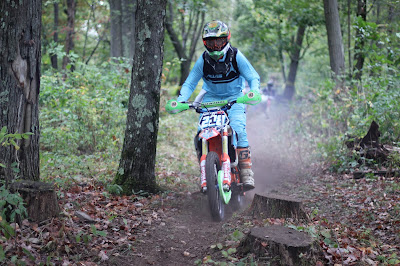 In the youth main it was once again Beeler and Fernandez with New Englander Brandon Nollete taking 3rd.  With only one round remaining, Beeler has secured his #1 plate for 2017. 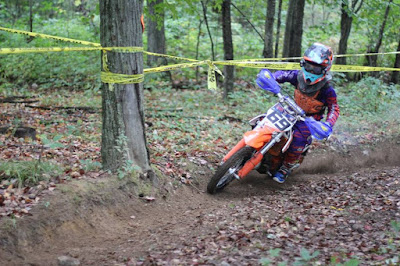 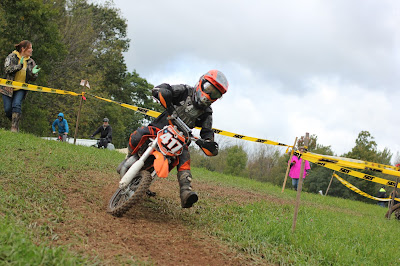 In the 50cc Pee Wees it was Carter "Pretzel" Przymelewski all the way.  Finishing in 2nd was Ryder Sigety and 3rd Hunter Gardner.  Sigety and Gardner will have to wait until round 11 to see who will hold that #1 Plate as the scores are too close to call.