The sprawling and gorgeous Ashcraft family farm was once again host to a collaborative weekend spectacle of vintage off-road motorcycling. AHRMA’s Northeast and Mid-Atlantic regional operations worked together to present another wonderful event in their third visit to the foothills of the Bald Eagle Mountain range just northwest of State College, PA. Patriarch, Brian Ashcraft, along with his considerable extended family are the most gracious hosts throughout the weekend. Not only had they spent considerable time and energy creating top-notch racecourses leading up to the event, but also provide excellent and comprehensive support to the racers and series’ staff throughout the weekend as well as serving wonderful food. 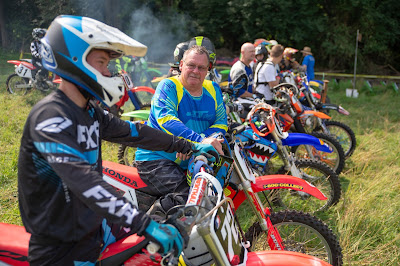 The Northeast region would serve as the facilitator for Saturday’s scheduled grass track motocross action. As in past events, the Ashcraft’s reserved the familiar pasture for its well-regarded grass-track. As always, the grass is high, and ribbons guide the way through a haven of natural terrain. An expanded starting area with a longer path to turn one was a welcome addition giving riders a bit more time to separate following the rubber band start. The first half of the course took a slightly different route through the off-camber western slope of the pasture before navigating the fan-lined straightaway along a high-tensile boundary fence where cheers welcome all racers. The second half of the course follows a similar path as year’s prior making sure to include the popular jump in the center of the pasture followed closely by the downhill ski jump with a  landing area that quickly turns 180 degrees as the course heads back uphill to the final few turns before the checkers. A standout motocross experience yet again.

Grant Reichart swapped moto wins with Adam Mavanik but Grant took the overall by virtue of a lower overall score on his Super Combat Wombat in Sportsman 125 Intermediate. Kelly (Ashcraft) Pearce made the local crowd proud with both moto wins over Laci Horvath and Emily Reichart in Post Vintage Women’s Expert action. Doug Reitz used consistency in taking the overall Vintage 60+ Expert win with two seconds after moto one winner Terry Herr was unable to get his Can-Am to the line resulting in a Paul Wawrynovic moto victory. Terry was far more successful in Post Vintage 60+ Expert with a pair of wins while Reitz settled for second. Dustin Loss rode his Suzuki to the moto two win and an overall while Geoff Kemp’s moto one win was enough to garner him runner-up. After wining moto one, Kevin Marshall was unable to hold back a charging Rik Smits in moto two. Smits would take the overall win in Post Vintage 50+ Intermediate on his Maico. Richard Light had his Kawasaki rolling with a pair of moto wins in Vintage 70+ Intermediate while his daughter-in-law Bean was also locking up the Post Vintage Women’s victory with a perfect score over Carol Bailey. Dan Ambrosio held off challenges from the Yamahas of Mike Giambone and Marc Kalipolites each moto to put his Suzuki atop the Historic 125 Intermediate class. 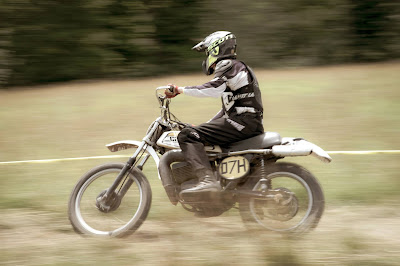 Terry Herr on the way to a moto win on his Can-Am.

Cross-country racing took center stage on Sunday with the Mid-Atlantic regional team serving as the primary operators. With the region’s recent adoption of a three-race format, the Ashcraft’s took a new approach to course layout driven by the nature of the property and comments from the previous events at the farm. There is a plethora of available trails throughout the property covering the entire mountainside and the lower ground at the base. As the ground gains elevation up the southern slope of the mountain, the terrain gets challenging, particularly for limited ground clearance vintage bikes. Having a three-race format made it easier for the folks setting up the course to justify creating a separate course for vintage classes aimed at maximizing the experience on the older bikes while the other two races would build upon that with some tougher mountain single track. All indications from riders in all classes prove that the decision was a success. 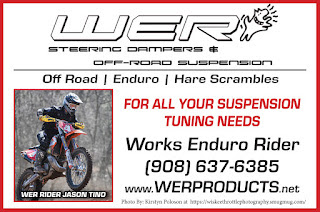 Contact Drew Smith for all your suspension and tuning needs - 908.637.6385
The morning’s vintage race saw forty-five riders hit some early single track right off the starting line that would eventually drop right into the grass-track course where riders were led around the first half of the MX track before making a hard left into some freshly cut single track right before the ski jump. A combination of fresh single track and existing two-track brought the pack from the far eastern part of the property to the fan-favorite quartet of sinkholes to the west. Another jaunt through some flowing foothill single track would complete a lap at just around four miles of fun. Fifty-six and thirty-two riders lined up for the Post Vintage and Disc Brake races later that day and were treated to a different experience. The afternoon course was supplementary to the vintage course as it followed the same path up to a certain point at which the trail pointed up the mountainside using a portion of high-quality, but challenging, single track that was used in last year’s event. The Ashcraft crew redirected some areas for a unique experience and added some fresh cut trail near the approximately 1800-foot summit of the mountain before descending for a jaunt through the sink holes where the course rejoined that of the morning’s action. At nearly seven miles in length, the course is the longest in the series and while challenging, it is truly a blast to ride. 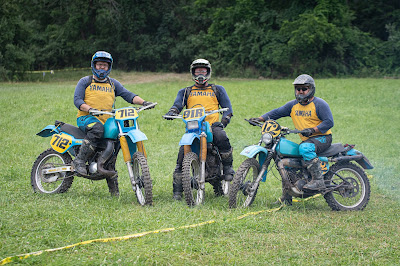 “Dover Vintage Riders” and their cohort of ITs – Eric Rupp, Shane Reichert, and Josh Stewart (L-R)

John Ashcraft defends his home turf with the overall and AA class wins in the Post Vintage and Disc Brake races while another local, Brian Grove, claimed the same in the morning’s Vintage event. Rick Huth made a much-anticipated return to race action at Ashcraft Farm and nailed down the top spot in Vintage 70+ Intermediate despite a strong challenge from runner-up Jim Heasley. Jacob Ritorto wowed the crowd by man-handling his thumping BSA in unique style to a first-place finish in Classic Intermediate over second place Taylor Belling. 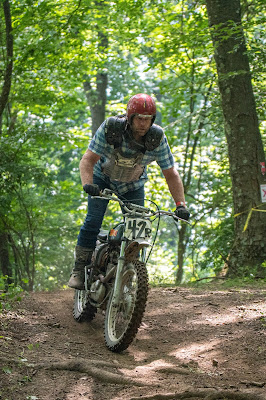 Jacob Ritorto and his BSA…speed with style.

Claudia McDowell is becoming a familiar face atop the Vintage Women’s Novice class as she collected another number one plaque for her efforts. Brock Kutskel ended the string of different winners in Post Vintage 200 Intermediate with his second consecutive win with another fast youngster, Sylas Merrell, lurking just behind. Josh Horvath controlled the Post Vintage Open Intermediate class for the last few rounds but couldn’t overcome the challenge from Jeremy Peace’s Honda and Tom Bank, as they claimed the top two spots respectively. Cameron Pennington and his CR250 made the move to the Expert class and wasted little time getting acclimated to the competition as he was the first to see checkers in Early Modern Expert action with Brian Schwein’s YZ second and Chris Haag in third on an XR. Josh Castaldo, Steve Winklebauer, and Wesley Heeman filled the Pre-2K Open Intermediate podium. 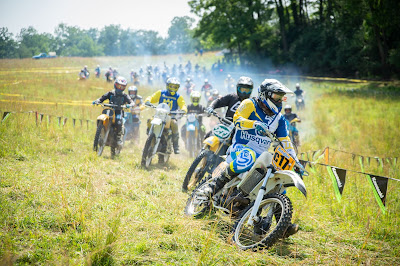 Joe Cole leads Josh Horvath (277) and the rest of the pack into turn one.

Contact Jim Bull for all your Real Estate needs in Pennsylvania

Tremendous thanks to Brian and Lisa Ashcraft and their family for the generosity in opening their home to the Northeast and Mid-Atlantic families each year. The hard work and pride they take in this event is easy to see and everyone that makes the turn onto Ashcraft Lane that weekend is welcomed openly. These events rely upon the hard work of many volunteers such as Ed Roman and Merritt Brown of the Northeast region and the Marshall’s, Zdybak’s, Reitz, Reichart, Cole, Kutskel, et al, crew of the Mid-Atlantic. Thanks to you all and to the various weekend volunteers for keeping the wheels moving and providing the participants great venues and experiences. Please support the people that support the sport; Northeast series sponsors are Equinox Cycles, Hatch’s Hodaka, Jenning’s ATV & Cycle, Metro Racing, and Mr. Crankshaft, while The Mid-Atlantic region is sponsored by Potomac Vintage Riders, Preston Petty Products, Stainless Cycle, Vee Rubber, Grove Printing, KMI Printing, Horizon Homes, and Works Enduro Riders. 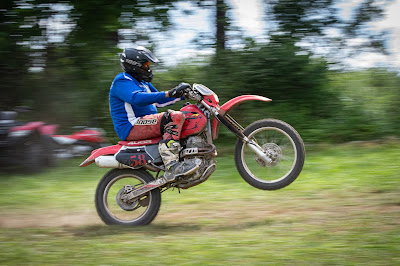 to the Pre-2k Open Expert win.

The 2021 schedule and complete results from this event can be found at: 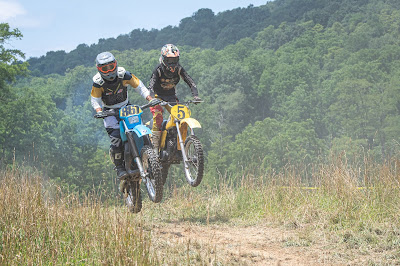