Round 10.5 of the SRT AMA East Hare Scramble Series. 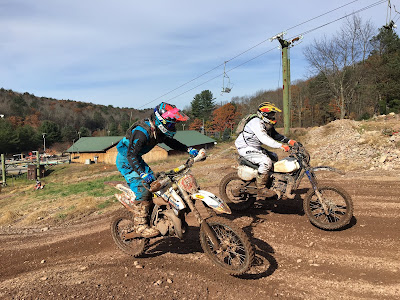 Beta USA was there with a vengeance this past weekend.  Racers Brian Dussault and Kyle McDonal would take 1st and 2nd amidst a gander of the best the East Coast has to offer.  17 AA racers from as many as 4 different series showed to do battle for both AMA East and NETRA year end points.

Netra top dog Nick Kordana aboard his KTM kept the two honest by chasing them to the checkers. Just over two hours, all three with sub 19 minute lap times.  Kordana, a member of the Stateline Trail Riders represented his club and NETRA well.  Leading for the five laps was NETRA - Jay Day favorite Brendan Riordan.

Riordan aboard his Yamaha clearly had the fastest lap times.  Unfortunately the brutal course took its toll.  Spoke to his mechanic who advised his 3rd gear went south and created havoc in the tranny.  Forced to pull off early but still managed 13th.   The big news however came from the Overall winner Beta's Dussault who on the 1st lap was in dead last position.  Dussault had to endure and pick his was through the pack of other AA racers.  No easy task by any stretch of the imagination.

Furthermore, the seven mile ski mountain course was definitely geared more towards a 4 stroke weaponry.  If you brought a 2 stroke, you brought a knife to a gunfight.  Fortunately for Dussault, no one told him.  2nd place McDonal also on a Beta would take 2nd place and at the same time received the coveted AMA East Hare Scramble Championship Hare Scramble #1 plate.   Great Job Tri State MC and NETRA for a great event. 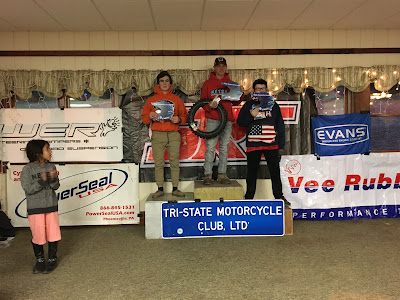 In the morning C Event it was case of the smallest bike with the greatest ambition. Saturday’s O/A Youth winner Brayden Nolette aboard his Husky 105 wowed them by winning the C morning event aboard the same bike. Brayden now goes by “Doble’ Nole ’”.  Brayden will be racing for Trail Jesters for 2019. 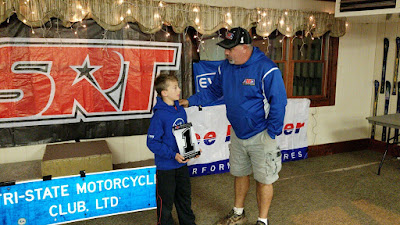 In the Jrs and Pee Wee 50 heats, those kids would take the brunt of the foul weather.  Two inches of rain the night before was pooled throughout the track.  In addition 30 mph winds were keeping many of the youth families at home.  Regardless there were several in attendance.

In the Jrs class it was Ryder Sigety aboard his newly acquired YZ65.  Dad has that bike dialed as Ryder would lead his class but also pass the 10-11 65's.  Ryder was presented with his AMA East HS #1 Plate today as he cinched the title with one round remaining.  In the Pee Wee 50's it was WNYOA regular Kooper Kinney abaord his KTM taking the overall and class win.

Well the series has come to a close and I can honestly say that this was a great year for manufacturers of Chains, Sprockets and Brakes.  Every event this year was affected by either Heavy Rain or Snow.  The rain fall this season set all kinds of records in the Northeast.  One round had to be cancelled, One round had to be re-scheduled and one round we are not allowed back due to the damage caused by not re-scheduling.  I want to say thank you to all who qualified for year end points.  OK, nuff said.

There was no shortage of action at Round 11 hosted by District 6 Sports Association at NJ Field of Dreams.  Heavy rains on Friday caused the promoter to shorten the course due to flooding.  The six mile course was now a five mile course and many of the Youth and C event trails had to be re-used. 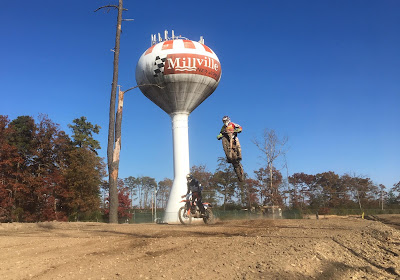 In the Main event it was SRT's Wild Wally Palmer with the hole shot and immediately began to pull away from the pack.  As always, Wally would do it with style and put on a show with his aerobatics.  The 1st 1.5 miles was the NJ Field of Dreams modified National Track.  From there, the racers would head into the woods for a 2.5 mile sand and mud trail.  Although the course lacked any single or tight trails, the promoter utilized very few straightaways.  On lap one Wally would emerge 1st with Kyle Mcdonal right on his fender.  the battle was between last years #1 and this years #1 plate holders (McDonal locked it up last weekend).  In 3rd place it was Trail Pros Billy Schlag 12 seconds back.
This would continue for several laps until Justin Lafferty would make the pass on Schlag.

Unfortunately while the AA's were doing battle with each other, A 250 racer Mike Beeler Jr would begin working his way through the A Open pack and then started to do battle with the AA racers.  By lap 5 he was 3rd place overall.  On lap 6 Mcdonal would make a pass on Palmer and take the lead for several laps until a broken clutch plate would drop him back and eventually out of the race by lap 11.

Palmer would regain the lead with Beeler and Lafferty in an all out battle for 2nd.  On the final lap it was Palmer, Lafferty and Beeler (Top A Rider).

In the C event it was the Youth racers in the Schoolboy and C-200 that would set the pace early on.  Schoolboy 2 Racer Hunter Cleveland would pass the front row and emerge from the woods in 1st.  Behind him was Trevor Kibler and Julian Wojcik from the Schoolboy 1 class.  this would remain for several laps until  Cleveland was forced to pull off with bike issues.  Now the battle was between Wojcik and Kibler.  3rd place was Ian Weisman from the C-200 class.  Weisman who just graduated from the youth classes as well.  After 1.5 hours it was Wojcik, Weisman and Liam Langer from the C-250 line.