Melting Myths about Snowmobiles and Ethanol

With snowmobile season kicking into high gear across many parts of the country, those who enjoy the outdoors are pulling their machines out of storage and getting them ready for another season of exploring. Unfortunately, there are persistent rumors that could mislead snowmobilers about fuel issues related to ethanol. Knowledge is power, so let’s examine a few of the more glaring myths around ethanol use with facts that explain why ethanol is safe to use in your small engine. 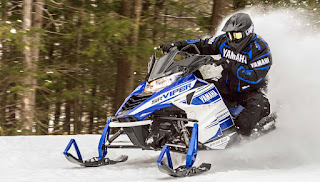 Myth: Any level of ethanol blended into gasoline is harmful to small engines.
Fact: Leading snowmobile manufactures such as Arctic Cat, Ski-Doo, Yamaha and Polaris all approve the use of fuel containing ethanol in their engines. An extensive amount of study has determined that E10, or fuel containing 10 percent ethanol and 90 percent gasoline, is suitable for use in small engines such as those found in snowmobiles and outboard boat motors. After all, ethanol is already in 97 percent of gas sold in the United States, so most outdoor enthusiasts are already using it and not experiencing issues.
Myth: Ethanol causes fuel to separate if it sits for an extended period of time.
Fact: Due to the fact that ethanol is water-soluble, it actually helps prevent phase separation. If a small amount of water finds its way into the fuel tank, as is common in small engines, ethanol allows it to be absorbed into the fuel mixture and pass harmlessly through the engine. West Marine states that this is actually a benefit of ethanol, not a drawback, as ethanol “…tends to keep low levels of water moving through the fuel system, keeping the system ‘dry.’” If a more significant amount of water is introduced into the fuel tank, inevitably problems will occur regardless of ethanol content. This is why outdoor enthusiasts should top off their tanks before use to prevent condensation and ensure tanks are empty before storing vehicles for an extended period of time.
Myth: Ethanol is more corrosive than gasoline.
Fact: Testing done by the National Association of Corrosion Engineers determined that fuel containing ethanol is not any more corrosive than non-ethanol fuel. In fact, the issue related to damage of small engines comes from the aromatics, which cause damage to the lines and fuel seals. Any fuel can be corrosive given the right conditions, so users should always follow manuals and practice proper storage procedures.
Myth: Ethanol provides less power than pure gasoline.
Fact: Ethanol is a high-octane biofuel that provides engines with more horsepower than regular gasoline. Pure ethanol has an octane rating of 113 (or higher), while most regular gasoline is 87. Ethanol is added to fuel to raise the octane level and prevent engine knocking. Previous fuel additives such as MTBE were polluting the air and waterways, and were significantly more expensive than ethanol. By switching to ethanol, our environment is cleaner and fuel is cheaper without any loss in power.
Myth: The numerous products sold claiming to cure ethanol-related issues are proof problems exist.
Fact: Any golfer or fishing enthusiast knows that just because a product is marketed as a miracle answer for improved results does not mean the product actually works as advertised. Engine issues can be hard to explain and even more annoying to fix, so it should be no surprise that products are sold claiming to be an easy fix. In reality, E10 fuel can actually reduce the need for fuel additives, since it prevents fuel line freeze, as noted by the Travelers Motor Club. That is why the snowmobile owner’s manual for Polaris recommends that those using non-ethanol fuel add another alcohol-based additive to their gas tank to prevent damage resulting from fuel system icing.
###
About American Ethanol
Representing a wide array of ethanol supporters, from farmers to bio-engineering firms, American Ethanol was established by Growth Energy, in partnership with the National Corn Growers Association and others. By establishing a marketing partnership with NASCAR starting with the 2011 racing season, the same year that NASCAR switched its fuel to Sunoco Green E15, American Ethanol aims to educate and inform the broader American public about the benefits of U.S.-made ethanol. For more information, visit www.AmericanEthanolRacing.com, follow us on Twitter @AmericanEthanol or connect with us on Facebook.