Photos by: Scott Mickelsen at  Roots, Rocks and Mud

Eagleswood, NJ was the setting for the final rounds of both AMA East and ECEA Hare Scrambles.  Its been 2 years since we were able to do a co sanction with ECEA but it was great to be home for the AMA East HQ's and staff. 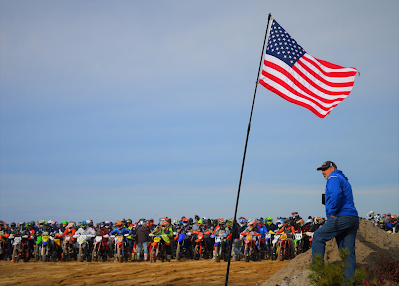 Over 750 racers from NYOA, NETRA, D6, ECEA and AMA East regulars converged on the small town of Eagleswood, NJ.  This was the largest off road race within the Tri State area for 2021. The club, Motorcycle Competition Inc, began prepping the course several weeks ago as they were anticipating the larger then normal crowds.  With this many racers, the course was sure to get hammered rather quickly.  Fortunately MCI did not let this happen.  Working directly with the management of Sahara Sands Mining facility, the club was able to put in several miles of single track trail with superb connector sections.  Added to the mix was 3 MX Grass tracks with each heat getting their own catered affair.  A great menu! 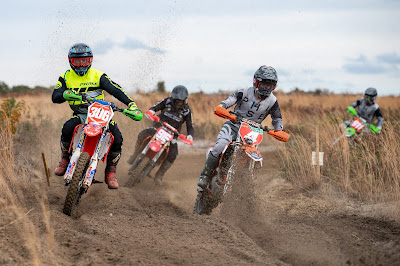 In the main event we had a dozen Pros thirsty for a year end win.  The current AMA East points leader, Kyle McDonal (Beta) had already cinched the title in Stillwater OK the week before but truly wanted to celebrate at home with friends and family. If he was to win this day, it would only add to the 2021 celebration.  Also on the line were several of the Lafferty family racers as well as some notable D6 and NETRA Rockstars.

When the green flag was raised it was AA Veteran Rich Lafferty (KTM) with the Hole Shot.  Directly behind him was his nephew Justin Lafferty (KTM).  The 2 immediately became targets and the roar at the shore was under way.  McDonal got squeezed on the inside and had his work cut out for him with a mid pack start.  By the time they reached the 1st mile marker, McDonal would take the lead. 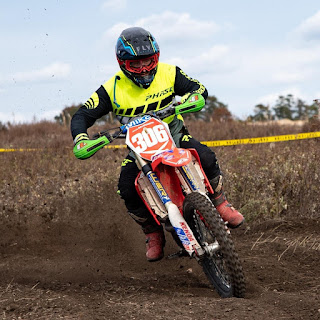 Behind him was yet another seasoned AA Vet Andrew Delong aboard his Privateer Honda. The 2 would begin a 4 lap battle which was 2 close to call when they came through scoring on lap 1.  Separated by only seconds, McDonal and Delong would set the pace.  Shortly after the start of lap 2, McDonal was forced to pit due to a bent rear brake lever which he caught on a root.  the lever was completely bent under the foot peg.  His pit crew got it bent back out and he was gone with the lead changing hands and Delong in front.

McDonal now had current ECEA points leader Jason Tino (KTM) stalking him less then 20 seconds back.  McDonal told this reporter, prior to the race, that 2nd would not be an option this day.  At the end of lap 2 McDonal was back in the lead with Delong one bike length behind with Tino still in contention.  On lap three McDonal and Delong would begin to pull away.  Behind them we saw New Englander Brayden Nollete from the A 250 Class move into the top 5.  There was no shortage of excitement going into the final 13 mile lap.  Our spotters at the halfway mark advised it was still to close to call.  McDonal was leading but just by a few seconds.  One mistake would force a lead change.  Fortunately for McDonal, he held his lines and surfaced onto the final stretch with Delong directly on his back fender.  Tino would settle for 3rd this day and secure the #1 Plate for the ECEA Series. 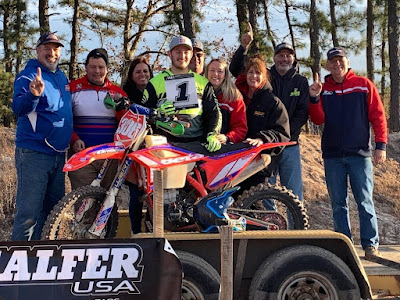 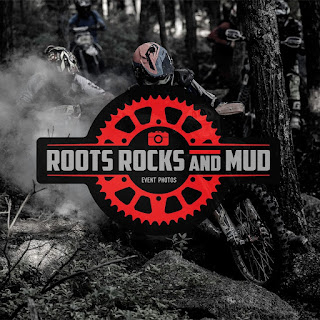 In the morning C event over 350 racers would fill the starting grid to capacity.  The top pilots would not come from the C open class or the C 250 class.  The young rocketeers would come out of the Schoolboy 1 and 2's.  Many of them had raced the day before in the Youth Main.  By the end of lap one we had 5 Schoolboy 1's leading the heat.  Out front was local favorite Lucas Seelman aboard his KTM.  Directly behind him was Dalton Hook (Yam) and Sahara Sands regular Joey Rainone (Kaw).  They would hold these positions for the 1.5 hour race.

GNCC regular Robert "Christopher" Weiss would get the holeshot racing a row forward in the 14-15 Super minis.  Wiess, a regular on the East Coast running with the 12-13 Super minis would up the anti at this final race and put a challenge to the older kids.  Weiss would check out within the 1st mile and never look back.  In 2nd place was Lucas Seelman and Joseph Rainone.  After 1.5 hours, this is how they would finish. 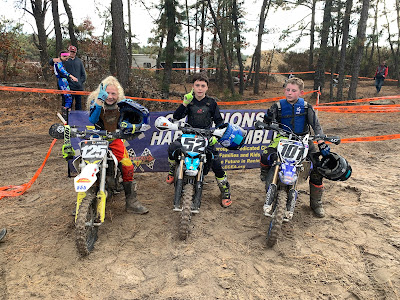 Camryn Popek on his Precision Powersports Yamaha would take the hole shot and would not see another racer until he would come upon the lappers.  Trying to draft him was his long time buddy and Yamaha Team Mate Gabe Molinari.  Cutting through the pack from the 2nd row was Enzo Zaccaria (HSQ).  Enzo would make the pass on Molinari for 2nd overall.  Enzo did try frantically to catch Popek but to no avail.  Popek was turning out 30 second faster lap times.  Enzo knew he had to keep up the pressure.  He is a 6 year Off Road racer and knows that it aint over till the checkers are dropped and anything can happen.  Fortunately for Popek....nothing happened and the checkers he would get.  Enzo would still take the win in his class 7-9 65c and 2nd OA.  On lap 4, 7-9 65cc racer Preston Siniavsky would had made a charge and would go from 5th to 3rd Overall and 2nd in his class. This would remain till the end.  Great job boys! 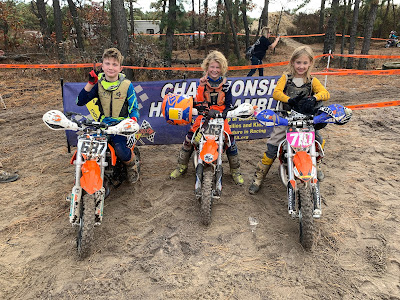 Its no secret that the future AMA AA's are coming from the front line in this heat.  Brendan Grey (KTM) who had already clinched the AMA East and the ECEA title was just out for a ride with his buddies.  This kid loves to race.  The battle today was for 2nd place for the year.  both Brian Sands and Landyn Dalmasso were only separated by a few points for the ECEA series heading into this final round.  Sands did not get the start he was hoping for which allowed Dalmasso the put some distance between them.  Sands was sitting back in 8th by the end of the 4th lap.  On the final lap, Sands did make a final lap push and got himself up to 4th position but just could not catch the determined Dalmasso.  In the end it was Grey, Dal