While not an outright “showdown” between the adjacent regions as the headline billing may suggest (got to have something to grab your attention, right?), the annual springtime collaborative event between the Mid-Atlantic and Northeast regions is always one of the best attended events each year (over one hundred eighty entries in 2021). 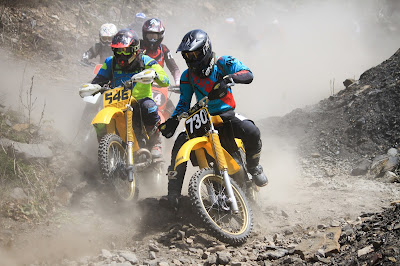 The influx of riders from both regions provides a great opportunity to test your mettle against new faces, make new acquaintances in the racing community, and revisit with old friends from nearby states. After an unfortunate cancellation of last year’s event, cross-country trail boss Dan Horengic was looking to capitalize on the enthusiasm of a 2021 return. What better way to make an impact than to debut an entirely new location with freshly cut trail! While historically the cross-country race was held on the same property as Sunday’s joint motocross race at Irish Valley, Dan and his crew were able to locate some fresh land just a few minutes away that would present a new challenge to the region’s woods racers while still maintaining the popularity of the Irish Valley motocross course for Sunday’s follow-up event. 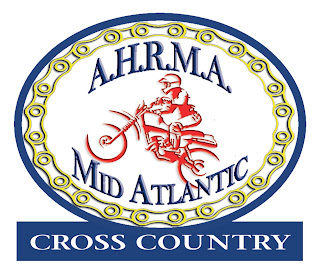 Famous Reading Outdoors (FRO) is a publicly accessible, permit-based, off-road wonderland spanning over 20,000 acres in Pennsylvania’s anthracite region., and its operations manager, Brian Rich, was generous enough to carve out a small area in Locust Gap, PA to host Saturday’s race. One look at any topographical map of FRO’s land in Northumberland and Schuylkill counties clearly demonstrates that the Dan’s track team was certainly presented with challenges, and puts an exclamation point on the cautionary disclaimers presented at the morning’s riders meeting. There is little ground that has been untouched by previous or active mining operations in this area. In fact, the parking and start area is a part of an active mining operation taking place just beyond sight. While the area provided was limited in acreage and the terrain difficult, Dan and his crew quickly went to work on the property to carve out a fun and challenging three-plus mile course. As stated, there were plenty of dangerous areas, and Dave Kutskel made it clear that the course is one of the more difficult in the series and warned that you do not stray off course due to hazards inherent in the land’s history. His description of the ribbons indicating the strip-mining created shear three-hundred-foot cliff within fifteen feet of the trail certainly drove home the point that safety demands attention this day.

All the hype surrounding the difficulty and conditions is certainly meant to humble and instigate a safe event foremost, but also to set expectations and define boundaries for those set to participate. In action, the racers operated within those boundaries and thankfully everyone remained safe. Reactions to the course were tremendously positive. The course was hemmed in between the active mine access road to the south and a steep mountainside to the north. Leaving the parking area start, the course made an immediate right and began ascending the hillside on an old rock-strewn access road. If there is something this area is known for besides coal…it’s rocks. Considering the rocky predisposition, the course was nearly 80% untouched, freshly cut, single track carefully wrought to avoid the worst of the rock areas, but inevitably required traversing at least two rather gnarly rock gardens as it wound it’s way through various piles, gullies, valleys, drops, hills, roots and trees to finish with a blast through some snaking two track in a stand of pines. After a lap or two in the morning race, the course really started to get broken in well and developed a fun and challenging flow with lots of interesting visual reminders of the land’s manipulation by human hands. Weather was wonderful for April, and conditions in the woods were magnificent. The starting and scoring areas were in an open area covered in powdery coal dust, so visibility in the eighth mile surrounding the scoring tent was a struggle. Thank you to the scoring team of Jess Reichart, Connie Zdybak, and Lori Spisak for steadfastly keeping track of the day’s action in those conditions. 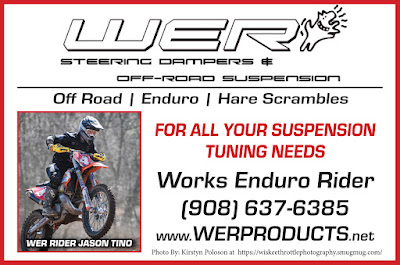 AA riders Brian Grove and Josh Zerance set the pace for the 54 riders in the morning’s vintage race. Grove’s Husqvarna would pull away to a near five-minute lead over Zerance to take the checkers for the overall win. Josh’s Can-Am held on for second. After years of persuasion from life-long family friend Richard Colahan, Jamie Wright made his vintage racing debut on Colahan’s race-prepped ’74 Honda XL250. With a missing muffler, it was hard to miss Jamie as he roared to third overall and the win in Vintage Open Expert competition. Mike Ferguson and Christian Brumbaugh would follow Jamie for second and third in class respectively. Ed Weger outlasted the early leaders Kevin Marshall and Ed Klinger when, on lap three, he muscled his Husqvarna past Klinger’s Husky to take the Vintage 50+ Intermediate class lead and never look back. Klinger held on to the second spot followed by Noah Gullichson in third. A large group of riders took the green flag in the Vintage 60+ intermediate class and proceeded to see nothing but Glenn Hershey’s rear fender, none more so than Otto Dejager who stalked Glenn’s Can-Am all race long closing the gap to two seconds at the white flag. Otto would then proceed to lay down his quickest lap time of the day ending Hershey’s dominance and claiming the class victory. Glenn would still muster a respectable second in the competitive class followed by constant rival Dave McIntyre in third. Jim Reitz pushed aside concerns that this wasn’t a novice friendly course by laying down a solid lap time to place himself as the top novice for the race, and a class win in Vintage 70+ Novice. 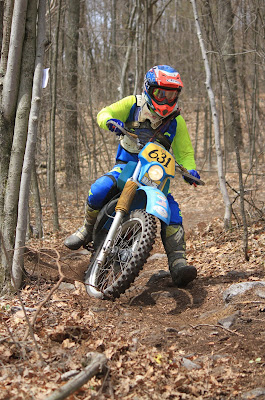 Any thought Brian Grove had of knocking down two AA class wins were spoiled by Steve Mason Jr as he had his Yamaha IT flying. Grove kept Mason on his toes being consistently within twenty seconds, but Mason would take the win in AA and the overall, with Grove taking second in both categories on his Husqvarna. Darrell Wassill was no slouch either laying down lap times close to the top two and nailing the third spot on the podium ahead of seventy-eight others. Post Vintage 50+ Intermediate laid claim to the largest class of the day with a whopping sixteen riders vying for the crown. Vince Monks would spoil the day for the rest when he took the lead on lap two and soldiered to a commanding win on his YZ. Tommy Tippett (Can-Am) and Anthony Yannitelli (Maico) tried to reel in Monks but to no avail as they had to settle for second and third. Kurt Flachbart made the trip down to PA from Maine to serve as the guest speaker at Saturday evening’s Mid-Atlantic and Northeast region awards banquet, where he humorously told his tale of a life-long motorcycle love affair and path to becoming the owner and editor of Trail Rider Magazine. While in town, Kurt lined his Husky up in the Post Vintage Open Intermediate row and capitalized on Josh Horvath’s early exit to take the lead and hold on to the capture the checkers followed by IT rider Mike Flaherty and Potomac Vintage Riders head honcho Tommy Grimmel in third. In more Open class action, Steven Perrotto, Mark Hummel, and Dane Brownawell swapped leads multiple times before Hummell’s Husqvarna took over for keeps on lap four. Dane maintained the runner-up spot on his Yamaha with Perrotto just behind. Laci Horvath followed up her earlier Women’s Vintage Expert win with another victory in the Women’s Post Vintage Expert class. 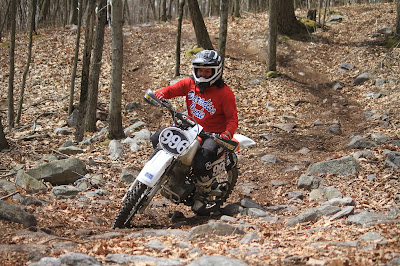 For several years now, the trio of Yamaha IT’s of Shane Reichert, Josh Stewart, and Eric Rupp, collectively known as the Dover Vintage Riders, have become a familiar sight in the Post Vintage 200 Intermediate class. While all are consistently in the mix in a competitive class, Rupp is the only member of the “team” to not yet have claimed a first-place finish at some point. That all changed at Locust Gap as Rupp was riding at the top of his game. Steadily shrugging off any challenge to the top spot and pushing his IT200 to fast and consistent lap times, Eric finally stamped his name in the winner’s column by mere seconds. It was truly heart-warming to see the joy shared by this group of close friends and their families as they celebrated the long-awaited victory together. 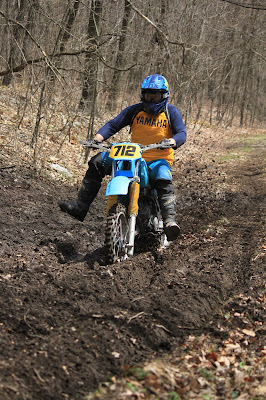 John Ashcraft is the man to beat when he is aboard his mighty CR500. Once again, he dominated the AA class besting Ethan Waddell (Yamaha) and Mike Blackwell (Kawasaki). Roy Miller spent the race being badgered by pressure from Mark Hummell before finally placing some breathing room between them on the last lap to make the Early Modern Open Expert victory a bit more convincing. Brian Schwein would follow closely behind on his YZ250 for third. The Pre-2K 200 Intermediate class is becoming a hot bed for ultra-competitive battles. Dave Light, Joey Spayd II, and Anthony Lowery did their best to live up to that expectation with multiple lead changes. The young guns Lowery (Yamaha) and Spayd (Suzuki) would push their way to the front to finish one-two with the elder-statesman Light rounding out the top-three on his KTM. Under the tutelage of his mentor, and Women’s Vintage Intermediate victor, Jenn Smith, Mason Swan ripped the holeshot on his Yamaha RT180 and led lap one before ultimately finishing a strong third behind winner Brandon Rowe and runner-up Al Linville in Pre-Modern 200 Novice action. 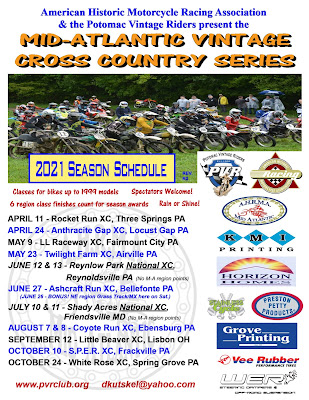 A big thanks to all the participants that continue to support and grow regional AHRMA cross-country racing, and congratulations to all for an enjoyable regional collaboration and safe inaugural Anthracite Run. Feedback following the event has been overwhelmingly positive, so fingers-crossed for a return in the future. As always thanks to the Mid-Atlantic and Northeast region’s ever-willing team of volunteers, Dan Horengic and his trail crew, and eternal thanks to the sponsors that make these events possible; Potomac Vintage Riders, Preston Petty Products, Stainless Cycle, Vee Rubber, Grove Printing, KMI Printing, Horizon Homes, Hatch’s Hodaka, Jennings ATV & Cycle, Northeast Vintage Riders Club, Northeast Cycle Service, and Works Enduro Riders. The 2021 schedule and complete results from this event can be found at https://www.ahrma.org/ahrma-mid-atlantic-region and https://www.ahrma.org/ahrma-northeast-region . Follow the series’ Facebook page @ AHRMA Mid Atlantic Cross Country and @ AHRMA Northeast for updates and news throughout the year. Special thanks to Famous Reading Outdoors (readingoutdoors.com) for the land access and continuing to facilitate and champion the world of off-road adventures.