Round 7 of the SRT AMA East Hare Scrambles by Beta hosted by VXCS - Lafferty turns up the heat at Burning Rock Off Road Park. 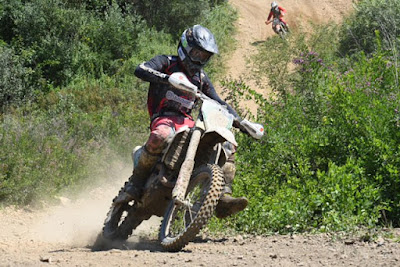 You couldn't ask for better weather or a better facility.  The 11 mile main event included a Turn Track, MX Sand, Hard Pack and Tight Rocky Root trails.  Basically the best of everything.

Beta's Thorn Devlin would get the Holeshot and take the early lead into the open fields followed by Ryder Lafferty HSQ and Sam Evans HSQ.  Devlin would overshoot a turn on the MX track and hand the lead off to Lafferty.

Devlin would jump back into the mix in 3rd place battling with Evans and Kyle McDonal for the 1st lap.  Lafferty would pull away by the middle of the 2nd lap and never look back.   The battle would now be for 2nd place.  More importantly Devlin is only a few points away from locking up the number #1 plate for 2020.

A win today would have brought him that much closer over Kyle McDonal.  Devlin would overheat his brakes in an attempt to catch Evans and at the same time try to keep McDonal behind him.  In the end it was Lafferty, Evans and Devlin with McDonal in a close 4th.  With 2 rounds remaining it is still undecided.  Our next round is scheduled to be held at NYOA in NY on 10-04-20 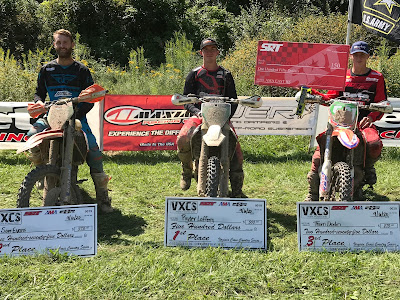 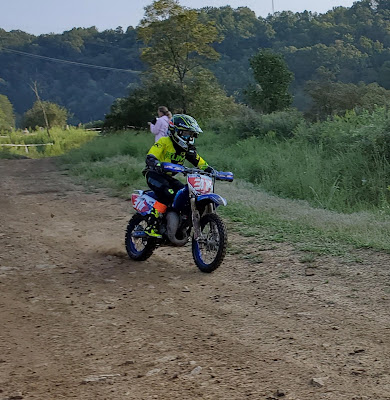 The Morning Youth event would have them run an abbreviated course from the main utilizing half the mountainous trails.  They did however share the same treacherous rock gardens. The 4 mile course would even cause the best of the best to run 20 minute laps.

Out to an early lead was the "Steam Roller" Tyler Atkinson aboard his KTM Super Mini.  Behind him was Harvey "The Raging Bull"  followed by Team Perfect Storms Cate Nash.  Nash would take a bad line in the technical rock garden allowing Atkinson and Bull to pull away.

Unfortunately for all 3, Ryder Sigety from the 9-11 Class aboard his Team Sigety YZ 85 would begin to make his way to the front.  By lap 2 Sigety would take the adjusted time lead but he didn't know that so he motored on.  By lap 3 he would make the pass physically.  He would finish on the top of the box with Atkinson in 2nd and Bull in 3rd. 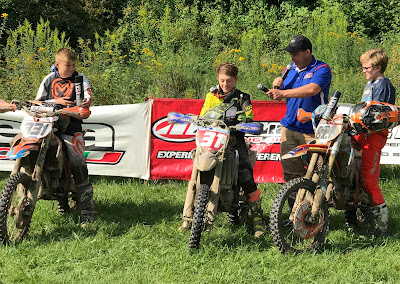