What can I say but wow!  This was quite an experiment that AMA East ventured out into.  A District 2 MX promoter, NJFOD, asked if he could co host a Hare Scramble.  We gave him the opportunity and working together, put on a truly amazing track.  3 miles of modified MX tracks and 4 miles of tight but flowing trail.  As luck would have it our 1st attempt to build the track was hampered by Hurricane Isaias the week before. 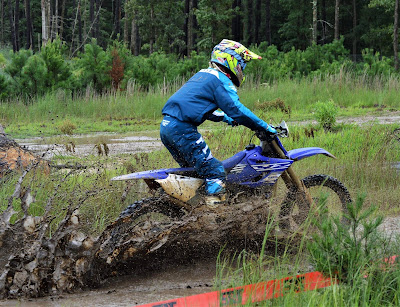 Well back to the drawing board.  Re routes and more SRT arrows and ribbons were needed.  An SOS flare was shot up in the air and help came from 5 local ECEA clubs who had their events compromised by Covid 19.

Without missing a beat they showed up with Staples guns and chain saws and a new course was made.  I can not thank them enough.  Come Sunday morning the event was now plagued with an acute weather system that would deliver an unfavorable forecast.  We sent out our section leaders to check the course for any storm damage but were met with another set back.  Sometime during the night a group of individuals pulled down most of the ribbons and the ones that remained were stapled in the wrong direction.  Ugh!  Not to surrender we went to an hour delay re-arrowed the entire course.  Better luck next time You Goons whoever you are. 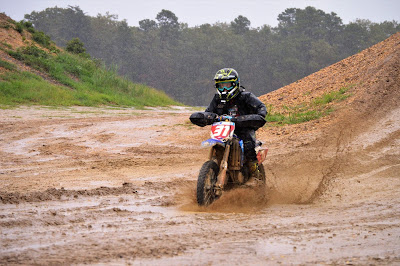 Our 1st heat was the youth main.  They would traverse a 4 mile course with a mile of MX and 3 miles of trail.  Out to a very early lead was no stranger to AMA East, former 65cc champion, Ryan Gribbin aboard his KTM Supermini.   Close behind and in his sites was Team Perfect Storm's Vince Caramanna.  In 3rd place from the 2nd row was AMA East regular R.C. Weiss aboard his Husqvarna Supermini.

Gribbin would eventually check out and the 2nd place O/A battle would now be between Caramanna and Weiss.  At the halfway point it was quite apparent that an 85cc Junior would start making his was to the front.  None other then Yamaha's Ryder Sigety.  Ryder would continue his pressure on the leaders and in the end secure 3rd O/A by just a 1 second adjusted time.  In the end it was Gribbin, Weiss and Sigety. 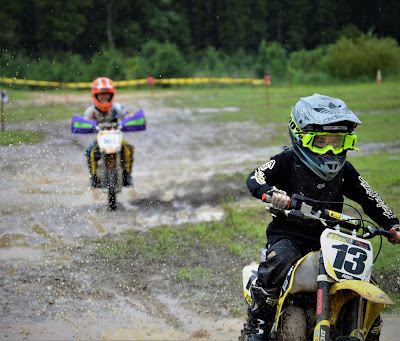 Heat 2 was the Pee Wee 50's.  An attempt to start them on the MX track was futile.  The event was quickly red flagged and a restart of only the woods portion is exactly what the Dr ordered.  A dozen or so determined pee wees took off in true AMA East fashion and devoured the 1.5 mile course.  An early battle ensued between 2 Cobra mounted racers, Vance Glisson and Eugenio Santiago.  They would be just seconds apart for 4 laps.  Often coming through scoring bar to bar.  They would exchange the lead several times but it was Glisson  who came out in front on the final lap.  In 3rd place pushing them along was Aiden Hunt from the 2nd row aboard his dad prepped KTM.

Next heat was the 65cc and Jrs.  A group decision was made between the promoter and the racer families to run the exact same track as the 50's due to the deteriorating MX tracks.  This would be woods only combined with a Pee Wee MX track.  On the 1st lap it was Ryder Sigety #31 aboard his Blu Cru prepped Yamaha 65.  He would establish an early lead and never look back.  2nd and 3rd O/A would come from 2nd rows Nathan Oswald aboard his Schaeffers Motorsports KTM.  Behind Oswald was Jaylen Dixon gripping his trusty SUZ 65. 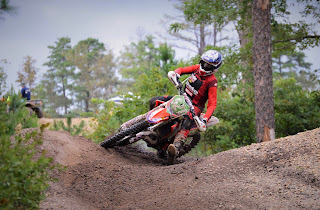 Next up was Heat 4 also known as the morning C event.  Unfortunately due to the weather and aforementioned saboteur, was now the afternoon C event.  The rain held off slightly but not enough to dry out the MX tracks.  We took a pole and the racers wanted the MX track.  They said if the Youth Main can do it we can do it.  The flag was dropped and off they went.


Almost immediately a battle between Team Perfect Storms Cate Nash (SUZ) and 2 brothers, Allen and Justin Adkins both aboard KTMs.  They would put on quite a show for the crowd traversing the bike swallowing wet sand track.  These young guns were setting the stage for the classes that followed.  At the halfway mark it was Yamaha mounted Mike Garrison from the C open class who would take the adjusted lead.  After 6 laps it would be Garrison who would O/A followed by Allen Adkins and Thomas Barry (Honda) from the C 250 class with the final podium position. 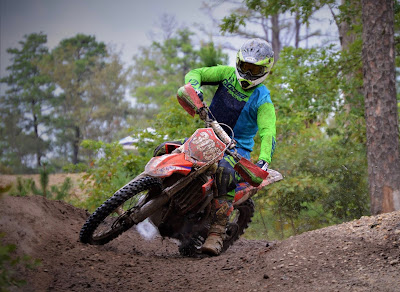 Heat 5 - The Main Event was to be a Beta Showdown.  With 2 Betas now in 1st and 2nd for O/A Series points, both Thorn Devlin (Newcomer) and Kyle McDonal (2018 - 2019 Champion) were lined up in attempt to lock up the points.  The series currently has 2 rounds remaining however with Covid and recent cancellations, it will be hard to judge this early in the year.  for that reason each racer has been doing their very best to make all the current rounds.  When the flag dropped it was Devlin with the holeshot and early lead.  At the halfway mark on lap 1, it was AMA East regular, Justin Lafferty in 2nd and McDonal in 3rd.

When they came around for the final leg it was Devlin, McDonal and then A-200 Racer Mad Max Fernandez.  Lafferty had faded back to 4th O/A.  Devlin would set a pace that no one could match and he was making it look EZ.  In talking with Devlin before the race and after he advised that attending the GNCC's has really brought his racing to a new level.  McDonal, who was not far behind kept up the pressure but after 8 laps it was not enough to catch Devlin.  Max Fernandez in the mean time was able to secure 3rd OA.  Someone get that kid a "AA" T-shirt already.  This is Mad Max's 2nd O/A Podium finish.  In the end it was a great event with plenty of racing action. With 2, possibly 3 rounds remaining, it is still undetermined who will be crowned the champion.  Our next round is scheduled on 09-06-20 @ VXCS in WV.  Stay tuned. 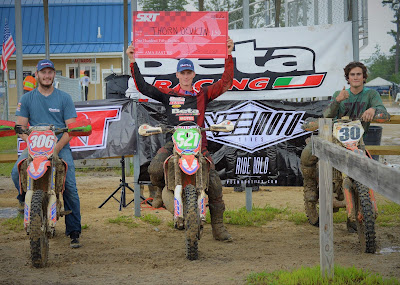