10/05/19 Millville, NJ Rd 9 of the SRT-AMA East Hare Scrambles Series.  Hosted by ECEA's Meteor MC.  Over 530 racers came out to play in the dust at the final round of the AMA East HS.  No rain for several weeks contributed to the worst dust anyone in this neck of the woods cared to remember.  Just walking near your car raised enough dust to make you sneeze.  You could see many scrambling for air filter skins and refreshing their current filters prior to each heat.  Many who came to the event on Saturday evening were simply following the dust that could be seen from 2 zip codes away from the youth events. 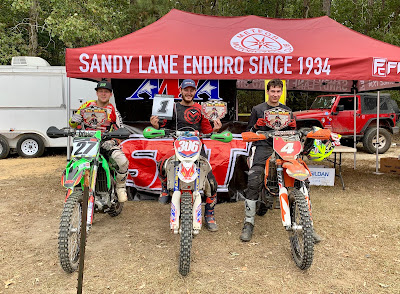 On to the racing..... In the main event, taking the holeshot, was Wild Wally Palmer aboard his newly acquired KX.  Wally, back from knee surgery, was suppose to take it easy, so he said.  Behind him was slew of who's who in East Coast racing.  Mike Lafferty actually through his leg over his KTM to give it a whirl.  Unbeknownst them, Kyle McDonal (Beta) and Hunter Bush (YAM) were still jonesing for the highly coveted SRT AMA East #1 plate which was not yet settled.  Back only a few points, Hunter needed to finish a couple of positions ahead of McDonal.  McDonal only needed to finish to take the yr end overall.  McDonal was also nursing 3 broken toes from Oklahoma.  After lap 1, it was Palmer in the lead with Mike Lafferty in pursuit.  Behind him just under a minute, was McDonal.  Keep in mind you could not be directly behind your opponents for long or you would have succumbed to the heavy dust conditions.  After speaking with the top finishers in each heat, there were only a few key locations that you could make a safe and effective pass.  On lap 2, McDonal would make the pass on both Lafferty and Palmer.  At that point McDonal would put it on cruise control.  McDonal is a very smooth racer with the experience to go only as fast as he needs.  In this case, he played it right.  After 2 hours he would take the checkered flag. Settling for second was Palmer and then Justin Lafferty (KTM).  Justin made a pass on his uncle on lap 3 and held that position til the end.  Mike would settle for 4th.  Unfortunately for Bush, he would have to settle for 5th for the day and 2nd for the year.  Justin would finish a strong 3rd.  We congratulate both Kyle McDonal, Hunter Bush and Justin Lafferty for their year long persistence and dedication to the sport. A notable mention goes out to Rachel Gutish, McDonal's Beta Team mate, would bring home the Womens A/B #1 plate as well.

In the morning C event The young guns of C-200 and Schoolboy would set the pace.  Josh Klouchek aboard his KTM 150 would start towards the rear of the starting grid in C-200.  This kid likes a challenge.  In rows 2 and 3 would let loose the Schoolboy 1 and 2 Teens.  These kids have no fear and would push from flag to flag.  An early overall lead would be established from SB 1 Remington "The Rock" Platt (KTM).  Platt who was released via row 3 would carve his way through the SB 2 pack Row 2.  Behind him was Team Perfect Storms Kenito Held (SUZ) also from SB 1.  Kenito aboard a 2002 Suzuki RM 125 "Re Build" project bike.  On lap 3 Klouchek, Platt and Held would begin to move both adjusted time and then physically to the front.  On the white flag lap, Klouchek would take the lead and Held would move into 2nd.  This would remain to the end. 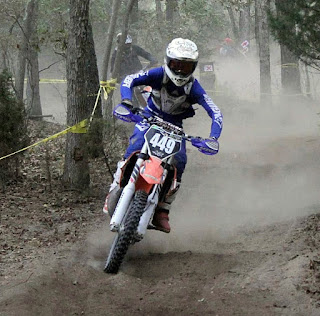 In Saturdays youth event, just under 100 youth would line up to do battle in what we would call the talcum challenge.  The Pee Wees and 65's already churned up the Meteor prepped and restored Ormond Farms track, thank you Beeler Equipment Rental.  Who had the advantage here was the 65's racers who were to double tap this event and race both heats.  They had an idea how the track flowed.  Notable mention goes out to Camryn Popek who would podium the Pee Wee and the 65's earlier this day.  Now he was doing the "Tri Zinger" and racing the youth main aboard his YZ 85.  For this event, however, all eyes were on Rock Hound's Caleb Baltimore (HUS),  G-Force Kyle Grenewicz (HON) and Team Perfect Storm's Kenito Held (SUZ).  The 2019 ECEA Overall youth would eliminate one of the above depending on this days results.  What makes this even more interesting is that the O/A  would not come from the front row but from the 2nd row of the fierce 12-13 Super minis.  When the flag dropped it was very hard to tell who took the holeshot in each row.  The dust was something like I have never seen before.  Therefore we will Fast Forward to the 1st lap times.  It was Caleb Baltimore in the lead with Kenito hot on his tail.  Behind them were Grenewicz and 14-16 Super mini racer Cole Hickman.  This would remain as such till the white flag lap.  Kenito was pushing for a final lap pass and was making time but a crash would drop him back to almost 3rd place where he and Grenewicz would start a new battle.  Kenito would hold 2nd til the end.   Grenewicz would secure 3rd which depleted his points lead on Baltimore.  Baltimore now leads by 3 points. Kenito needed a win to stay in contention for the ECEA O/A. This would not happen however he did secure the AMA East HS Class win and Youth O/A. See ecea.org for class results.

Like the Youth Main event, there is an ongoing battle for the Jr 65's O/A.  This is between Carter "Pretzel" Przymelewski (KTM) and young gun Ryder Sigety (YAM).  Each has a terrain advantage. Sigety in the rocks and Pretzel in the sand.  This was Pretzels day.  He would lead from flag to flag.  Sigety did not falter however and finished a solid 3rd.  Sneaking in between the two on lap 3 was Off Road and MX Rockstar Hunter Gardner (YAM).  Hunter has been racing both Hare Scrambles and MX and it shows.

The first event of the day were the Pee Wee 50's.  Trust me, there was no shortage in excitement.  The Popek-Zaccaria saga continues.  These two have been battling flag to flag at every event.  Many times the lead will change on the final lap.  Zaccaria had already secured the AMA East 50 O/A at the previous round, however the ECEA top dog is still up for grabs.  Separated by only a few points, this battle will now go to the final round.  Zaccaria would take the win this day with Popek a close 2nd.  Tanner Emmons (KTM) would take 3rd.  Stay tuned.