If you’ve been living under a rock for the last couple of weeks, I’m proud to break the news that the U.S. International Six Days Enduro World Trophy Team won the ISDE for the first time since the event was founded in 1913! If you’re not sure what this means, I can tell you it’s a big deal. We essentially just won the Olympic equivalent of off-road motorcycle racing. Google it now because it is very important. 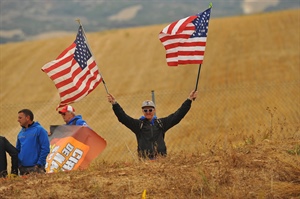 AMA Off-Road Manager Erek Kudla reps America at the 2016 ISDE. (Photo: Mark Kariya)
Personally, I have followed the ISDE for most of my life. My dad followed it for most of his life. My brother was fast enough to actually qualify twice -- for Italy 2013 and Slovakia 2015. I tried to qualify but am not fast enough. This is the source of the joke, "I see why you got the job at the AMA now! So you could actually make it to ISDE." Hardy har har, guys. Thanks.

Nonetheless, the skunk stripes (that's a reference to the helmet design that has been used by U.S. team riders since before I was born) really, really mean something to my family. The skunk stripes are not something easy to earn, and those who have earned them run them for their entire life from then on. So being able to go this year was a great honor and being able to watch the team win it was beyond explanation. Just writing about it brings a tear to the eye, and I can tell you there were very few dry ones on any of the American faces I saw at the event.

But, lets back up a little bit… I want to talk about the real backbone of the U.S. ISDE Team. Let me preface this by stating that our entire ISDE program was set into motion long before I started at the AMA. My only real input was helping with some paperwork at the office, facilitating a few other FIM-related things and recording history as it unfolded. The reason this achievement was  possible -- and the glue that held the entire thing together -- was the U.S. ISDE crew. When everything was being organized to head out to Spain, we were short on volunteers. When I asked, "well, how many do we have?" they replied, "only 113." Only 113! That’s more people than put on an entire race here in the States! I would have never guessed that it took that many people on the back end to help our 28 riders chase gold. Most, if not all, were past ISDE competitors, winners, friends, family and fans alike. AMA Motorcycle Hall of Famer Jeff Fredette, for instance, was one of the many heading-up operations, and Jeff has competed in 34 ISDEs himself!

Once I got to the paddock, I saw what this meant. The pits were pumping with “USA” shirts and work gloves putting together Rabaconda tire changers, setting up tool boards, breaking down boxes, getting our mobile kitchen set up, helping riders with whatever they needed… This was before anything actually happened. Most of them were there for as long as 10 days before I arrived myself. Unloading our two crates that were shipped a full month before the event even started. This was like an ant farm of people working away to get ready for the start of the event.

Once the event actually began, there had already been months and months of work hours logged by many of the workers. With all of the preparation it was almost on auto-pilot after the first riders left the impound. We had people everywhere -- in the morning work station, at every check with a work area set up, at every test on both the “In” and the “out” to take tool packs and jackets, record times and then pass back everything to the riders. We had gofers for everything we needed. Then we had our kitchen crews and chase crews with factory KTM mechanics to help diagnose things in the work areas. At the end of each day, it kicked into overdrive for the next crew (made up of many from the day crew) who took on all the administrative responsibilities and getting the pits set up for the next day. It was pretty amazing to see all of the effort that went into the program. There were so many moving parts, so many people working so hard I know I’m going to forget someone and some process, but I can tell you it was amazing to watch!

By the end of the day, the announcer just said “and once again, no surprise, America is coming to the stage.” I would say that is a great analogy for how this past week went. In true American spirit, taking the worst circumstances and making the absolute best of them, the U.S. ISDE Team proved that it was the best in the world.

I am very proud of the job that they did representing the United States and I am sure you are too.